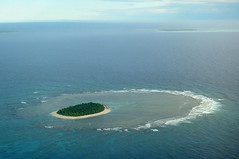 News on the wire from Rick is that a tsunami warning was issued for the South Pacific after a 7.9 earthquake registered about 209km (130 miles) south-east of Tonga.  The first report from the U.S. National Weather Service’s Pacific tsunami center is that “Sea level readings confirm that a tsunami was generated. This tsunami may have been destructive along coastlines of the region near the earthquake epicenter.” However according to the BBC, “…there are no immediate reports of damage.”

2 Replies to “Tsunami Warning in the South Pacific”