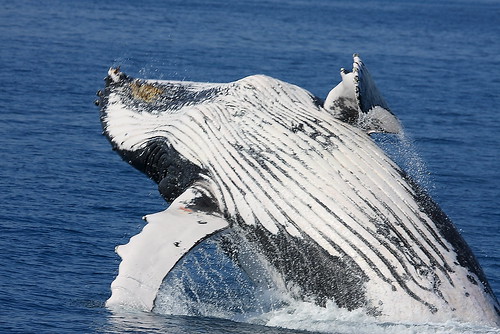 No matter what meaning I intend with the title, it has more than likely made you uncomfortable.  It makes me uncomfortable to write it. I do this as a sort of social and individual level experiment for both of us.

A stranded whale washes ashore.  What do you do?  One naturally tries to save it.  There is sort of unwritten code among us.  We should save animals…entire species from extinction and individuals from death.  We intervene both in part to help the animal and because it helps lower our guilt, makes us feel like we are actively participating in conservation, and selfishly makes us feel like better stewards.

Of the 54 beachings of deep sea whales between 2002 and 2006, every rescue attempt failed.  Dr Paul Jepson, from the Zoological Society of London, said by the time the mammals reach our shores and estuaries they are severely dehydrated and have muscle damage that leads to kidney failure. The RSPCA [Royal Society for the Prevention of Cruelty for Animals] said rescue teams felt under “emotional pressure” to save whales. But added: “It is unlikely we will be rescuing in future.” From now on, beached whales will only be saved if they can be taken to sea within an hour. Experts said that is “highly unlikely” in the UK.

This makes one contemplate previous reactions to posts here, Diving With Sharks, and Southern Fried Scientist, on Sea Shepard.  Regardless of your opinion on the organization, Sea Shepard is able to mobilize and energize a certain contingent.  How important is the belief in action over real results, often hard to assess, among Sea Shepard and other NGO’s?  Is action alone enough or should we be accountable for producing results from action?

9 Replies to “Let The Whales Die”