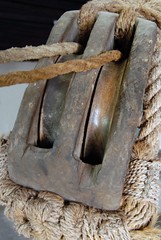 Image from Kalense Kid at Flickr and available by Creative Commons

Items packed so tightly together as to prevent movement.

A chock is typically a wooden wedge used to secure moving objects on deck and in the hold.  A block and tackle is the pulley system used to hoist the rigging.  However, the phrase appears to stem from when the no more free rope exists and the block jam tightly together.

The phrase describes what occurs the system is raised to its fullest extent – when there is no more rope free and the blocks jam tightly together. Frederick Chamier’s novel The Life of a Sailor, 1832 includes this figurative use of the term:

“Here my lads is another messmate…” – What, another!” roared a ruddy-faced midshipman of about eighteen. “He must stow himself away, for we are chock-a-block here.”

Thanks goest to Gary Martin for doing all the leg work here.  Gary’s website Phrase Finder is likely to provide much more fodder for posts.