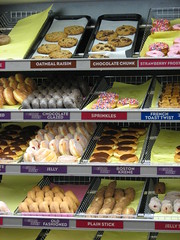 Source: Flickr by author Qfamily made available through Creative Commons

Diversity is a matter of area.  This is because there is a well-known relationship between species and area, called rather cleverly the species-area curve.  You increase the size of the area sampled; you increase the number of species. However, this relationship is not linear as the term “curve” would suggest, i.e. species increase consistently with increasing area.  Rather as area increases, the rate at which new species are encountered decreases, a power law function. Think of it this way…you go to the beach and you begin counting species in a tide pool.  Everything is new to you so your tally quickly increases.  At tide pool 2 you find a few new species but some you have already seen.  10 tide pools in and you pretty much seen everything except an occasional rare species. You can see it might be useful to have set of descriptors that describe diversity over spatial scales.

Whittaker (1972) suggested that diversity had alpha, beta, and gamma components.
•    Alpha diversity-the diversity in a local area with uniform habitat type.
•    Gamma diversity-the diversity of a region, with region defined as a large area without major barriers to dispersal.
•    Beta diversity-is the change in species as you move from one habitat to another. If habitats contain generalists, species well equipped to survive anywhere, then beta diversity will low.  If habitats possess specialists, species geared for a particular set of environmental parameters, then beta diversity is high. This is also referred to as species turnover.

Thus regional, or gamma, diversity is both the number of species in a habitat and how many species the habitats share in common, i.e. Gamma=alpha diversity*beta diversity

Today’s example includes donuts.  I am writing this on Sunday morning before breakfast so you will have to bear with me.  My local donut shop, let’s call them Jimmy’s Donuts Extravaganza, serves 12 kinds of donuts…mmmm donuts.  So the alpha diversity at Jimmy’s is 12.

Now just last week, a new earth friendly, all organic vegan, donut shop opened nearby, Earthchild’s Goodearth Donuts.  They have 6 donut types.  Now there is no way that either of these places have the same types of donuts.  For starters, Jimmy doesn’t even no what vegan means or that alfalfa sprouts are cattle feed.  So there is no overlap in donuts.  If we define beta diversity on scale of 0-1, where 1 is complete overlap in donut types, then beta diversity between Jimmy’s and Earthchild’s is 0. So gamma diversity is 18.

Now a local convenient store, Kwik-E-Mart also carries donuts.  God help anybody who eats them.  Of the 12 they carry, 6 overlap with Jimmy’s.  Beta diversity between Kwik-E-Mart and Jimmy’s is 0.5 and as expected 0 with Earthchild’s. So now gamma diversity is 24 because all 12 of Kwik-E-Mart’s donuts are not new to my area.

Another new store, Big Ol’ Donuts, opens and it really just more of the same except for one new tasty donut that contains coconut sprinkles.  Although alpha-diversity of Big Ol’ Donut is high 19, only one donut is different, and thus donut gamma diversity of my area only increases to 25.