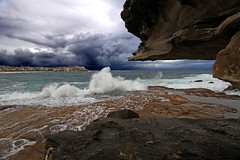 If a crewman is standing watch on the weather side of the bow, he will be subject to the constant beating of the sea and the ocean spray. He will be under the weather.