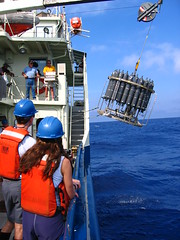 What do you think of when see the term “seawater”? Salty water? Perhaps fish-poo-covered-bacterial-ooze-slime-haven-so-salty-I-puke-in-my-snorkel-every-time-it-touches-my-tongue? Well, the definition of seawater has been limited by how we can measure it and what type of information that we wish to glean from knowing something about seawater.

For over 30 years now, researchers have defined seawater based solely upon its salinity. The problem is that salinity is measured by conductivity and this measurement assumes that the entire world’s oceans have the same salinity. It is well-known now that this is not true. For instance, deep sea water is more dense because it is colder and concentrated with more salt. In fact, this slight difference between deep sea water and surface water explains different behaviors of each body of water. Oceanographers can actually track the movement of water in ocean by mapping the changes in salinity over time for a body of water.

Over the course of the last few years. Dr. Frank Millero and colleague have created a new definition of seawater that takes into account the many advances in ocean thermodynamics over the last 30 years. If you are interested in the details of the new equations and more of the history you can check out this freely downloadable report (link opens a pdf) from the Australian environmental agency CSIRO. The interesting parts are summarized in this press release from CSIRO:

Salinity, comprising the salts washed from rocks, is measured using the conductivity of seawater – a technique which assumes that the composition of salt in seawater is the same in all the world’s oceans.

“The new approach, involving Absolute Salinity, takes into account the changes in the composition of seasalt between different ocean basins which, while small, are a factor of about 10 larger than the accuracy with which scientists can measure salinity at sea,” Dr McDougall says.

Until the new description of seawater is widely adopted, ocean models will continue to assume that the heat content of seawater is proportional to a particular temperature variable called “potential temperature”.

“The new description allows scientists to calculate the errors involved by using this approximation while also presenting a much more accurate measure of the heat content of seawater, namely Conservative Temperature,” Dr McDougall says.

“The difference is mostly less than 1ºC at the sea surface, but it is important to correct for these biases in ocean models.”

This will be an important correction for climate change change models. Even though we here at DSN think the deep sea is the most important habitat on the planet, much of the economical parts of the ocean (i.e. fishing industries, coral reef tourism, etc.) lie in surface waters which are more sensitive to smaller fluctuations in temperature. By taking into account heat capacity and potential temperature, climate change models will be better tweaked and will reflect a more accurate model of ocean processes into the larger picture.