Where The Oil Is Going

Scientists at the National Center for Atmospheric Research (NCAR) released a series of simulations showing that the oil in the Gulf is likely to reach the East Coast. (h/t Dot Earth). The yellow dye in the model “represents the best estimate of how ocean currents are likely to respond under typical wind conditions.”

This animation shows one scenario of how oil released at the location of the Deepwater Horizon disaster on April 20 in the Gulf of Mexico may move in the upper 65 feet of the ocean. This is not a forecast, but rather, it illustrates a likely dispersal pathway of the oil for roughly four months following the spill. It assumes oil spilling continuously from April 20 to June 20. The colors represent a dilution factor ranging from red (most concentrated) to green (most diluted).  The dilution factor does not attempt to estimate the actual barrels of oil at any spot; rather, it depicts how much of the total oil from the source that will be carried elsewhere by ocean currents. For example, areas showing a dilution factor of 0.01 would have one-hundredth the concentration of oil present at the spill site.

What Should The Feds Be Doing?

Philip H., an oceanographer now working in DC, wonders what exactly the federal government should be doing, and with what resources.

But more to the point, what more does the federal government have an obligation to do? And with what resources? I’ve heard that the Navy should be deployed, but to what end? Destroyers and guided missile frigates are too big to pull skimmers or boom; smaller in shore craft lack endurance for staying at sea for weeks on end. Most, if not all of the private sector vessels that are equipped for response are already contracted to BP, so the feds couldn’t really bring in any more boats or crews.

On shore, boom was pulled along hundreds of miles of coast line well before the oil arrived, and the oil got through anyway. Having done oil boom placement and retrieval, I know of no way the government could have done it that the shrimpers and BP’s contractors didn’t. And now that the oil is in the marsh, the real question of how do we get it out is raised. Here the federal government may be able to predict what the impacts to ecosystems and species are, but do you really want the Army Corps of Engineers pulling up giant bucket-fulls of marsh mud and plants to remove the oil? That’s the only real mechanical solution that a federal agency could undertake, and it would destroy – as much as the oil is destroying – one of our Nation’s most productive ecosystems.

Of course, the booming may have been done “totally fucking wrong.” Fishgrease on the Daily Kos provides salty dialogue and a helpful diagram. 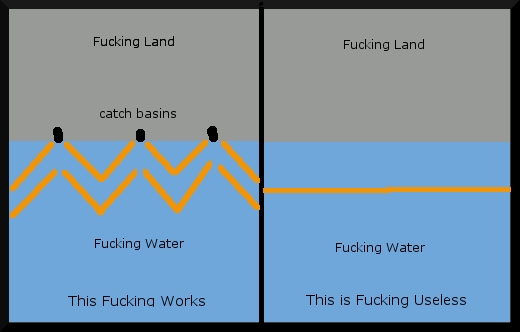