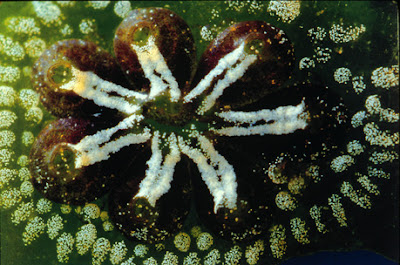 Photo of Botryllus schlosseri from the Swalla Lab website

Yep, that’s right. They get it on with any male gamete that passes their way. They just don’t give a [rhymes with duck]. Boom chaka-laka-boom. These loose lizzies are all about increasing genetic diversity if you know what I mean. OH, I know you know what I mean!

In the journal Molecular Ecology, Johnson & Yund explore the promiscuity of tunicates (In order to preserve my somewhat kid-friendly stature, I won’t even go into all the possibilities with “sea squirt”… but feel free to in comments!). I like this study, not only for its obvious connotations, but because multiple paternity in a sessile critter is an interesting and fundamental research question. Most studies of promiscuity have focused on mobile fauna. But the uncanny Urochordate, Botryllus schlosseri, has another interesting facet. It alternates between being male and female, without storing any sperm. Yep, that’s right. Being male is just a phase that Tunicates go through!

Using molecular tools such as DNA microsatellites (short repetitive sequences that are inherited from parents to offspring) and sperm haplotyping (remember kids, sperm have only one copy of the male genome), the authors investigated the role of multiple paternity using three measures

They found 15 sperm haplotypes appearing to come from a random pool. In other words, the nearest neighbors were not represented more often. I find this interesting because common sense dictates that colonies would show skewing of sperm haplotypes towards males that are closest to the embryos of the females being sampled as opposed to sperm that had to travel further. More distant traveling sperm may die out more quickly or become more diluted before reaching females. But this doesn’t appear to be the case with Botryllus schlosseri from Maine’s Damariscotta River estuary.

Using the most conservative measure, Johnson and Yund found a whopping 90% of broods were sired from multiple fathers. In fact, the smallest effective paternity from any one population was 2.4, meaning that there at least more than 2 fathers for each brood. The highest effective paternity was 14.2! That’s a virtual Orgychordata if you ask me! Keep in mind they only genotyped 15-20 embryos out of a potential pool of over 4,000 embryos in a brood. So I would definitely say that B. schlosseri is the slut of the invertebrate world. But that is not without its potential advantages as outlined in the conclusion:

“Polyandry to increase genetic diversity is predicted to be favoured only (i) as a mechanism of inbreeding avoidance (ii) under situations of completely unpredictable environmental fluctuation (iii) when there is intense sibling competition, or (iv) when there is some cooperative or compensatory interaction among half-sibs.”

It seems more probable to me that SEA SQUIRTS THEY JUST WANNA HAVE FUN!

2 Replies to “Female Urochordates Have Few, If Any, Inhibitions”