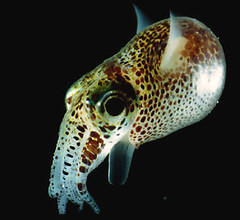 Millions of links, like the millions of Vibrio inside of me!

Heath of the We Beasties blog (its about microbes) describes new research about the role of 2 important microbes in the ocean and how using comparative population genomics approach helps to understand environmental change in their ecosystem.

Mark Schrope is still blogging from sea on his Nature Network blog  The Blow Out Experiment. Last week we discussed some of the challenges of doing deep-sea research on the effects of the oil spill on seafloor communities and the deep-sea coral research that is one of the main goals of the cruise. And finally, they get some serious bottom time and some great shot of the seafloor inhabitants (not to mention some sampling).

Apparently, BP chief thinks we blew the this whole oil spill thingamajigger out of proportion and I guess sort of feels victimized by our watchful eye and (guest)estimations of oil spill impact during the time the oil was spewing out of their broken wellhead. Maybe it they were more forthcoming at the time with data and observations, they wouldn’t be on the defensive now and covering there asses. Guess what Dudley, you F’ed up! Whenever I F up, I get shitstorms rained upon me, why should it be any different with you?? Of course, he is happy to be in the loving arms of his mother England.

Mr. Dudley also thanked the British government for its “stalwart support” in the face of harsh attacks from United States lawmakers during the crisis. “At the height of the crisis it made a big difference knowing we had such good friends at home,” said Mr. Dudley, an American.

NPR’s Robert Krulwich has a fun blog post titled Linneaus, Shlinnaeus! about how scientists have a little much fun naming new species sometimes!

Sometimes we all need a little help from our little friends! Jessica Hilo writes at Miller-McCune about the Vibrio bacterial family. Vibrio subside their usual parthenogenecity to work together with the Hawai’ian bobtail squid and keep the squid well-hidden from its predators with bioluminescence.

Chris of the infamous Echinoblog describes his new paper describing a brand deep-sea coral spankin’ sea star predator! Deep-sea corals everywhere are retracting polyps and calcifying themselves in whenever these bad boys Echinodermata mosey into town!

Deep-sea coral and larval biologist Sandra Brooke is out at sea with Greenpeace and blogged her cruise diary over at The Spill.

HOLY FREAKING MOLA! Julia Whitty at Deep Blue Home has EVERYTHING you need to know about the ocean sun fish, aka the Mola Mola, aka nature’s vertical floating pancake with fins. A beautiful, strange animal and certainly one of my favorite fish!

Its Rocktober for coastal ecologist David Kimbro who talks about his experimental research on oyster reefs in the Gulf of Mexico and how he  has to get some serious fieldwork in over the Coastal Health Blog!

The latest Maritime Monday over gCaptain.

Do sea urchins tolerate acid oceans? It appears they do and Rosalind Pidcock at BBC News has the story of some latest research findings. Echinoblog Chris suggests on his facebook page that it  might have to do with Echinoderms having internal skeletal structures, whereas mollusks (which are affected by ocean acidification) are externally festooned with skeletal structure.

Certain Canadian registered mining companies better be on their best humanitarian and environmental behavior because their parliament enacted a new law that will keep a tight watch over their companies operating in foreign lands, with a way for foreign individuals to file formal complaints with the Canadian Prime Minister to launch an investigation.

Sea Monster Monday: Kraken of the Sea and of Our Trembling Fear, a very nice article over at Scuttlefish.

Finally, because we hate you dear reader, an attorney in Louisiana goes out to investigate a stench of death and decay and uncovers buried mounds of dead fish that BP oil spill workers appear to be burying in middens on closed beaches. Seriously guys, wtf? For the geologists in the crowd pay special attention to the oiled strata in the sandstone cuts.