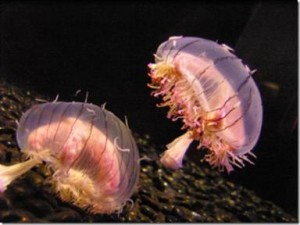 New dispatch from the Coastal Health blog by marine ecologist David Kimbro. He explains why subtidal oysters taste better and has a nice video podcast. Well worth the read and listen!

Mark Powell over at Blogfish describes why a NY Times article is off the mark when it calculates the impact of natural methane seeps versus the oil spill. Hint: there is a reason it is called a ‘seep’.

Are salmon losing genetic diversity because of us? Mark Kniver from BBC News reports on Spanish salmon are losing out from human disruption of their migratory pathways. Researchers are close to disentangling the effects of humans and climate change (i.e. warming riverways) of this vulnerable, tasty species.

Ammonite counterpart as cirri-pied-au-terre. I love this photo.

Victoria Gill writes up some fabulous deep-sea research at BBC Earth chock about exploration of the Peru-Chile Trench. At 8000 meter, this place it chock full of new species and represents an important new area for deep-sea biogeography. Worth the click for the pictures alone!

3 Degrees of Japan’s Seas is a wonderful new National Geographic piece by Juli Berwald with photos by Brian Skerry. Of course, it is National Geographic, so expect stunning photography, exciting and informative video, writing that gives a sense of place and other multimedia activities! There is lot more to Japan that sushi and freaky cartoon characters.

An article about a long-distance whale in NY Times Science. A female humpback was caught in a 6,000 km relay race from breeding grounds off of Brazil to breading grounds off of Madagascar in about a year. What is cool about this study is that tale photos were matched by a research assistant scouring Flickr tourist photos! More at Ed Yong’s award winning Not Exactly Rocket Science.

Remember during the last couple years we have talked about research institutions selling off their vessels because of the lack funding? Well, that’s come back to bite the US in the ass! Nature News has a nice feature story on how the dearth of oceanographic vessels has contributing to hampering the oil spill research response.

Julia Whitty at Deep Blue Home has a nice piece on how life stirs the oceans, nicely illustrated with fantastic images too!

In the WTF department, The Honolulu Weekly reports has a fascinating report of a deal the Bush Administration struck with the holders of fishing licenses in the newly designated Papahānaumokuākea Marine National Monument.These fishermen were also fishing unsustainably, but they sure made a killing by NOT fishing!

The news came innocuously enough, in a press release earlier this year from the National Oceanographic and Atmospheric Administration. As a result of former President George W. Bush’s designation of the Northwestern Hawaiian Islands as a marine national monument in June 2006, Congress appropriated funds to compensate the owners of seven bottomfish licenses and 15 lobster licenses because they would no longer be able to fish there. The bottom-fishermen would share $2.2 million, the lobster fishermen $4.3 million. All licenses had been given out for free.

Happy birthday to the US Navy, serving our country at home and abroad for 235 years! A nice background over at Old Salt Blog.

Many reptiles have environmentally determined gender. If the earth is warming does this mean skewed sex ratios for sea turtles? David Schiffman from Southern Fried Science has the story and an interview with a graduate student researching sea turtles.

David also an excellent discussion about how the TEA Party will seriously F up science if they gain any traction. It should serve as a wake up to scientists that yes, politics matters to you!

Crinoids, more than just pretty echinoderms to look at! Chris Mah of the Fab Echinoblog shares some cool new research that helps deep-sea scientists determine the current vector by merely studying how they looked when they were feeding.

The US isn’t the only place lucky enough to get oil spills. There was a a spill near Singapore a short while ago. The bloggers at Wild Shores of Singapore have two updates up with gratuitous uses of photography documenting the state of what they found at Tanah Merah.

One Reply to “OLinkias formosa”