In my last post, I showed that ocean food webs are being re-written by human driven extinctions and invasions. In particular, most species that have been driven extinct by man are predators.

So there are fewer species of predators. Does this matter? Won’t, say, all of the other predators just become more abundant, compensate, and the oceans will continue along normally. Sure, the beauty of natural diversity may decrease, but perhaps the importance of having a lot of different kinds of species around is pretty minor. You just need, what, maybe two or three, and you’re all good. The rest is window dressing, right? 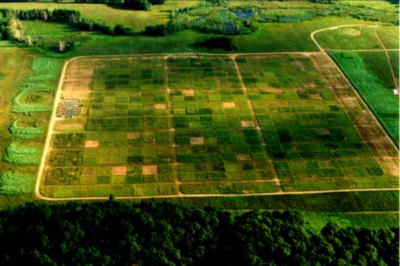 The canonical photo of Dave Tilman’s large-scale grassland biodiversity manipulations. Totally breathtaking in scope. Also, there is a law somewhere that you’re not allowed to talk about diversity-function research without including a picture of these plots. Seriously.

And so, dear readers, we have now entered into the wild world of research known as Biodiversity and Ecosystem Function. So, a little background. Bear with me.
Beginning in the mid-1990s, ecologists started a series of experiments to determine whether species diversity actually affects the productivity of grassland ecosystems. Work by Dave Tilman, Andy Hector, Dave Hooper, Michel Loreau – I could go on listing the awesome scientists for a while – showed pretty definitively (and multiple meta-analyses and experiments in different systems have confirmed, with some notable variation – I mean, it’s science, if there was only one answer, the universe would be a pretty boring place) that on average (I’m a scientist, I need my qualifiers) diversity indeed increases productivity. It does this through two means – first, different species of plants do different things. They use different resources, vary in resistance to different stressors, are eaten by different plants, grow at different times of year, etc. This is called complementarity. The second is more subtle, and for a while was not seen as a ‘diversity’ effect (there have been some big fights over this). That is the selection (or sampling, depending on the paper) effect. Namely that high diversity mixtures are more likely to have a super-productive species included. One may argue that, heck, just cut everything back to the single super productive species, but, further work has shown that a super productive species is not always so super-productive in all contexts, nor does it necessarily maximize other functions. But that’s another story for another time. The great thing about both of these mechanisms is that they have solid explanations in basic ecological theory stretching back decades. And the similar patterns have been seen in experiments with algae, plankton, etc. Satisfying, no?
All right. Now that we’ve gotten over the heavy background, you may have noticed something. I’ve been talking about grassland/algae/plankton experiments. But in the oceans, predators are what is going extinct. Does that mean the story is different?
Predators are not plants. The ways that predator extinctions will reshape the ocean are different. Emmett Duffy (yes, the Natural Patriot) published a kickass thought piece in 2002 that I can still remember searing an impression in my brain. Predators move, behave, eat each other, eat plants, change the behavior of their prey, and more. Would the story be the same?
So I started asking, does predator diversity matter in kelp forests? In particular, do more diverse assemblages of predators reduce the ability of herbivores to go hog-wild and overgraze giant kelp? Working with the Stacho-lab, I assembled some artificial mini-kelp forests – tanks with giant kelp and several different kinds of herbivores – and artificially manipulated the diversity of crab and sea star predators inside of them. To account for the predators-going-extinct-but-survivors-increasing-in-abundance scenario, I held the total number of predators constant, regardless of diversity. Sure enough more species of predators led to lower grazing rates on kelp and hence higher kelp productivity. And sure enough, when I went out and looked at data from kelp forests around the Channel Islands National Park, I found patterns consistent with my experiment – forests with higher predator diversity had fewer grazers and more kelp. But there was a problem. 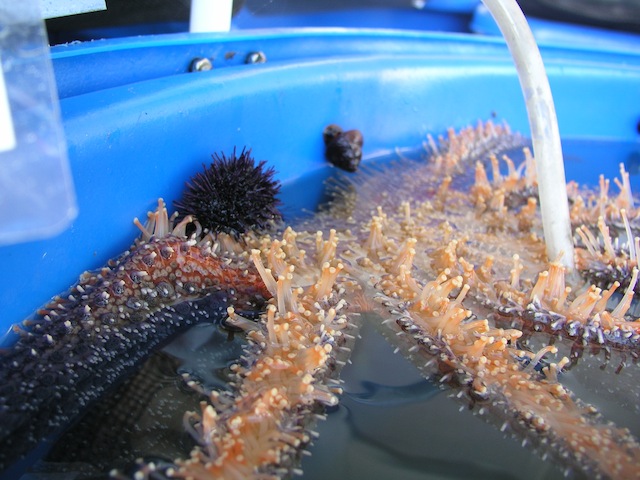 Unlike the Channel Islands data – and indeed unlike what we’d predict from looking at the effects of plant diversity – in my tanks, higher predator diversity did bupkiss to the number of herbivores left in the tanks by the end of the experiment. Quelle horror, no? In the tanks, everybody ate almost everything (OK, Pycnopodia didn’t eat kelp crabs – but that wasn’t enough to provide a clear signal). Heck, even one of my collaborators called the experiment the ‘Chambers of Death’. What was driving the patterns in the experiment?

I put some herbivores in individual boxes with a piece of kelp, and poked holes in the sides. I then submerged those boxes in tanks with the same assemblages of predators as before. Snails and urchins could smell the predator outside, but they wouldn’t be eaten. I also let kelp crabs roam free in the tank with the predators. But, as they had only been eaten by predatory crabs, I put bands around the predators claws. So there was crab-on-crab wrasslin’, but no kelp crabs were harmed in the experiment. Well, ok, maybe psychologically.

I view these results with some caution, though. In my little arenas, the effects of fear may be jacked up. And escapes are limited for herbivores. I was struck by the patterns I saw in the Channel Islands data, and my intuition tells me that, in nature, some combination of different predators both eating and scaring different herbivores is at play.

A kelp crab, Pugettia producta pinned down by a Cancer crab. Note the band on the crab claw. The kelp crab could not be eaten. After this photo was taken, the kelp crab scurried up to the top of a drain pipe, and stayed there for the duration of the experiment, eating very little. On a side-note, maybe I’m bit of a crab sadist, but I love this picture.

But the story is far from over. While this experiment turned out beautifully, other concurrent work going on at the same time showed that, if predators also eat each other, or if predators are really omnivores and eat algae, too, then the effects of losses in predator diversity are not so simple to deduce. The roles of fear and different predators eating different grazers may play a role in nature, but there are other things left to explore. While I would have liked to go out, cage a whole big stand of giant kelp, and do some crazy manipulations, that wasn’t going to happen. I needed another system to conduct more detailed experiments. And where better, than… THE DOCKS! Next time!