I reckon one of the best parts of planning any trip is the book time you spend brushing up on your destination.  I loved Diego de Landa’s “Yucatan Before and After the Conquest“, which I read in Mexico last year while doing field work in that spectacular peninsula.  So it is that I come to be reading up on the Amazon river basin this year.  Not that I’m sailing up that mighty muddy meander anytime soon, but I did have a first visit to Brazil in January and – one day – the Amazon will be mine, oh yes, it will be mine.  Plus, I had to fess up that I just know jack about rainforests, and that one in particular.  So, I grabbed a couple of books and started reading.  Interestingly, Michael Goulding is the first author of both, so it afforded a good chance to compare books on content moreso than author style. 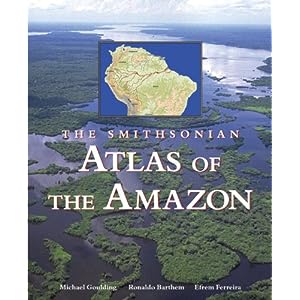 In The Smithsonian Atlas of the Amazon, Goulding and co-authors Ronaldo Berthem and Efrem Ferreira take a spatially explicit  approach to the world’s largest river basin, exploring the major tributaries such as the Madeira, Xingu, Tapajos, Tocantins, and Negro, many of which would be mighty rivers in their own right, if only they drained into the sea instead of an even bigger basin.  Despite the name, maps do not make up the majority of the book.  Instead, it is full of photographs and explanatory text, describing the geological, climatological, sociological and ecological settings of each region.  Especially relevant are the discussions of the different habitat types including whitewater (muddy), clearwater and blackwater tributaries, as well as flooded forests full of frugivorous fish, floodplain lakes  with their meter-wide giant lilies, and vast floating meadows of grass munched by shy riverine manatees.   The maps are there more to help you understand where in this mind-bogglingly convoluted labyrinth of channels, lakes, forests and floodplains the current discussion is focused.  In that role, they’re perfectly applied, and I found the book to be immensely informative and surprisingly readable.  Then again, I’m the kind of guy who actually reads atlases, so what does that say?  Best discovery:  I had no idea that until the Andes were pushed up, the Amazon flowed the other way, from east to west, draining Eastern Brazil and Guyana into the Pacific somewhere in Peru. 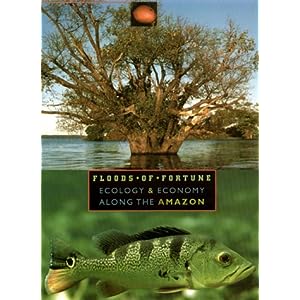 The other book, Floods of Fortune: Ecology and Economy Along the Amazon, is co-authored  with Nigel Smith and Dennis Mahar and is a quite different critter.  This one takes a more historical narrative approach to explaining how the Amazon comes to be what we see today, both biologically and sociologically.  The different phases – pre-conquest, colonial, rubber, jute, livestock, fisheries – are defined with respect to the development of rural life and the major cities (especially Manaus) alike, along with civil projects like dams and highways and how they’ve generally failed to open the Amazon to anything that might be called sustainable development.  Instead, the Amazon has developed a litany of problems: overfishing, pollution, poverty, deforestation and introduced species.  In reading this I realised that, while much of the Amazon is part of sovereign Brazil, you can’t blame any one country, or indeed all of them, for the problems of the basin.  The thing that allows many of these problems to develop is the very same thing preventing the from becoming more serious: the sheer remote, inaccessible vastness of the ecosystems in question and the enormous refugia that this offers (to animals and criminals alike!).  Some parts of the forested floodplain are so remote that uncontacted tribes are still being encountered.  Think about that: uncontacted in 2010!  In reading Floods of Fortune I did find myself hankering for maps from time to time, especially when Goulding et al. were bandying around exotic names for places and peoples.  Perhaps it would not be so had I read it before I read the Atlas and not the other way around, but I doubt it.

Taken together, these two books provide a great introduction to the history and status of the worlds mightiest river system.  Certainly I was left with a sense of anxiety about the problems facing the basin, but also with profound hope that the Amazon is still big enough and unexplored enough that all is not lost.  Far from it; it seems clear that there is time and opportunity enough to conserve vast tracts of meadow, flooded forest, blackwater streams and muddy main channel, as long as we act decisively and with the interests of the people of the basin (both native and other) given equal consideration as the ecology.  Or rather, that the people are seen as part of that ecology.  If I had to pick one of the two, it would be the Smithsonian Atlas (that geographical context is just essential) but, really, you can’t go wrong.  Now, where’s my passport…