Slip into a smoking jacket, pour yourself a glass of bourbon, light a cigar, and enjoy this post on 10 Ocean Species Every Man Should Love. 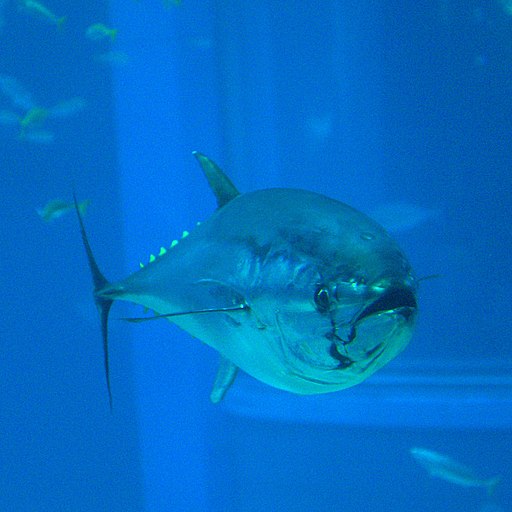 One of the rarest engines you can find in an early 70’s Dodge Charger is the 426 cubic inch Hemi V8. The 426’s asking price in 1970 was over $1200. Most buyers did not favor this expensive option. Besides buyers would need to save extra money for that sweet 8-track player. $1200 is also what you would pay recently for the brand new all-time record price tag for bluefin tuna ($736,700 for a 593lb individual). Relatively a small individual considering these predatory giants can reach near 10 feet in length and weigh almost 1000 pounds. Although unlike opting for the 426 Hemi in a 70 Dodge Charger, eating Pacific Bluefin Tuna (Thunnus orientalis) actually substantially decreases your manliness. Real men don’t eat species on the brink of extinction. Real men appreciate that Bluefin as the bad asses of the ocean; an ocean going Dodge Charger Hemified muscle car. Although most fish are cold-blooded, bluefins are hot rods, running hot, and regulating their body temperature up to 36 degrees above the water temperature. All that heat insures that the bluefin’s muscles can crank out power and speed like that rare 426 cu in Hemi V8 (which could hit 13.2 @ 108 mph in 1/4 mile). In 10-20 second sprints, bluefins can reach in excess of 30 miles per hour. 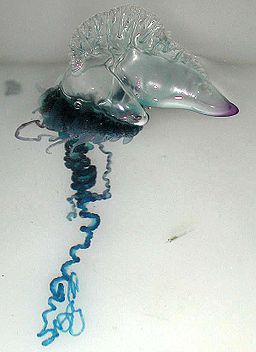 From the 16th to 19th centuries, anyone on the high seas feared the 1,000 ton, 100 gunned, 3 mast sailing vessels referred to man-o-wars, likely referring to ship full of heavily armed soldiers. Nothing is manlier than seamen drinking grog, singing sea shanties, and firing off large guns. And nothing is manlier than a species named after an armed sailing ship. Enter the Portugese Man-O-War (Physalia physalis). However, it may better to think of this species as Borg mothership collective than a 16th century British warship. Each Portuguese Man-O-War is a colonial animal made up of individual zooids. Sure these ‘jellies’ may seem dainty but 1/3 the zooids are geared for shear killing, another 1/3 for eating, and another 1/3 for making love. The tentacles are individual defense zooids lined with specialized triggered, harpoon like, poison tipped, nematocysts. Nothing escapes including 10,000 people a year. These stinging nematocysts are so bad ass that tentacles long since dead and detached from the colony can still sting. Once a fish and damn near anything else encounters a defense zooid, the feeding zooids take over to dissolve the tasty treat. Man-O-Wars can consume up to 120 fish a day. And with a belly full of dissolved fish there is more than enough energy for the reproduction zooids to get busy. Colonies are either male or female and sperm and eggs are blasted out into the water every fall. You may ask how a Portuguese Man-O-War gets around. When you covered in 30-150 feet of tentacled badness you can simply float around like the bad ass you are. A float that sets on the surface catches the wind and lazily transports you around while you kill, eat, and …

If a Portuguese Man-O-War is manly then any species immune to its venom and known to rip off its tentacles and use them for defensive purposes deserves a spot on this list. Number three on the list is the Blanket Octopus (Tremoctopus) An octopus named after a blanket may not sound manly, but you got to respect ladies when they are 100 times bigger than the dudes (over 6ft vs. a couple of inches). Blanket Octopuses are so called because of the webbing that exists between the arms of the females. Females ward off predators, forgoing ink , by billowing this webbing, making them appear larger than they are. As you savor that bourbon you may be pondering what the life of male Blanket Octopus is. Tiny males live only to reproduce. A detachable arm of the male is modified to store sperm. Once the arm detaches it crawls inside the female to fertilize the eggs. Nothing is manlier than losing a limb to pleasure and fertilize a sexual partner.

Clint Eastwood is the epitome of manliness. My dream day includes the two of us drinking bourbon, smoking cigars, and watching The Outlaw Josey Wales. At one of the most memorable moments in the film, Clint as Josey Wales states “Are you gonna pull those pistols or whistle Dixie?” Shortly after projectile shenanigans ensue. Like Josey, Pistol Shrimp (Family Alpheidae), are entering guns blazing. Pistol shrimp possess one extraordinarily large claw with specialized joint allowing the claw to be cocked. Once released the claw snaps creating a cavitation bubble capable of creating a sonic boom. That bubble reaches speeds of 60 mph and reaches 218 decibels. That Rage Against the Machine concert you attended a decade ago and still recovering from probably only reached 115 decibels. Pain starts at 125 decibels. This death bubble is more than sufficient to kill small fish and stun larger ones. The only thing that would make Pistol Shrimp manlier is calling them Clint Eastwood Shrimp.

To round out the first five of our Ten Species Every Many Should Know is the Narwhal ( Monodon monoceros).

Wait…what? Did I just seriously put the unicorn on the sea on a manly ocean species list?

Motörhead’s Snaggletooth logo is one of the manliest if not the scariest logos of all time and representative of macho bikers everywhere. That skull with the horns coming out of the mouth still haunts my dreams. If you placed that wild boar-wolf-demon-skull creature in the ocean it is basically the Narwhal. In males, an incisor tooth on the left side of the upper jaw can helically grow up to 10 feet long, almost half the length of the whale. Darwin, one of the most manliest of scientist (both for changing all of science and the beard), actually argued that this is secondary sexual characteristic meant to woo females, like peacock feathers (but way more badass). Even more badass is the 2 in 1000 males that form two tusks and come much closer to the Snaggletooth logo. And if that isn’t enough, in a name likely to please Lemmy, the name Narwhal derives from the Old Norse word meaning corpse, in reference to the whales greyish skin, like that of a drowned sailor.

Feel like I’m missing a manly ocean species? Put them in the comments below and they may make it into the next five! Now enjoy some Ace of Spades