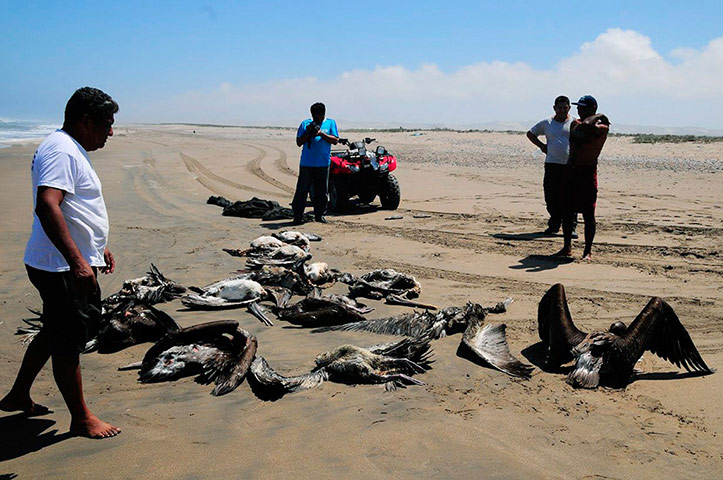 Dead pelicans on the beach in Peru. Img: The Guardian

As many as 900 dolphins and over 4,000 pelicans have washed up dead on the beaches of northern Peru in the last couple of months, (see news coverage here, here and here), leading to a flurry of activity as various authorities and other interested parties move to find out what is going on.  Experts cited in the news coverage suggest that unusually warm surface waters (10F higher than the season average) are changing the swimming patterns of the huge anchovetta schools off the coast of Peru, driving them deeper and out of the diving range of pelicans.  In other words, the pelicans appear to be starving.  The dolphins on the other hand, have shown a high prevalence of infection with morbilivirus, which is an infectious disease.

The events in Peru touch on some important issues regarding die offs of marine animals.  I experienced many of these issues back when I was working on the collapse of American lobster populations in Long Island Sound in 1999 and the years that followed.  I’m not an expert on marine mammals or birds, though, but luckily my boss is.  Dr. Greg Bossart is the Chief Veterinary Officer and Senior Vice President here at Georgia Aquarium and we chatted a bit about the Peru situation and about marine animal die offs in general.  I didn’t record the conversation so I am not going to quote him directly, but here’s the gist of what we agreed on:

Environmental toxins are worth a look.  In situations like the one in Peru, where strong seasonal weather effects have profound impacts on the coastal food web, biotoxins from planktonic algae that can accumulate up the food chain are well worth investigating as a cause of animal deaths, especially where multiple species are involved.  There are quite a few such toxins in the oceans, including brevetoxin, saxitoxin and domoic acid.  Some of these are super nasty (saxitoxin is one of the most potent neurotoxins known to science).  Unfortunately they can be hard to detect

Beware confirmation bias.  Human brains are wired to look for patterns and for correlations in the constant stream of information we’re taking in, but this essential function sometimes leads us astray.  The deaths of so many dolphins and pelicans in Peru may well be connected to a common root cause, but they could just as easily be a coincidence.  Sometimes it takes real force of will to accept coincidence. “What are the chances?” people say, and they are right, the chances are low, but if you play the game long enough, even rare events (like two unrelated mortality events happening at once) are a virtual certainty.

Marine animal mortality events are messy.  This is a really important concept and one that a lot of folks struggle with.  There’s a general perception that life in the oceans is at equilibrium and that when it is not, a single cause or perturbation must be responsible.   In the LIS lobster situation, many folks wanted to blame pesticide spraying on the shores of Long Island Sound and, similarly, some folks are looking for a single cause that would explain the coincident deaths of so many dolphins and pelicans in Peru.  Unfortunately, it is rarely the case that any given die off can be so neatly ascribed to a single cause. More likely, there is a confluence of events, some environmental, some ecological, some infectious, that cause events like this; some animals may die from one proximate cause and some from another.   In the LIS lobster situation, two key environmental changes (high temperature and hypoxia) combined with at least three diseases (Neoparamoeba, shell disease and calcinosis) and some fishery effects to cause the problem.   These multifactorial explanations are hard to discover, hard to describe, and even harder for many people to accept.  My guess is that this reflects a simplistic human  grasp of cause and effect.  We want A to cause B, but sometimes B is caused by 7% A, 13% C, 21% J and the rest who-the-hell-knows? That’s nature: it’s messy.

You may never know.  Greg pointed out that sometimes we can never know why a given mortality event happened, because often by the time you get out there to collect data, the event has come and gone and all you have to work with is a bunch of smelly carcasses with tissues too autolysed (a nice way to say rotted)  to be any diagnostic use.  Greg described this as “downstream data”.  I would equate it to walking among the wreckage of a bomb blast and trying to work out what sort of building it was before the explosion: it takes time, it’s difficult, and you may never work it out.  Unfortunately, emotions and anxieties run high when animals are dying, especially marine mammals, and many are quick to blame scientists or authorities for “moving too slowly” to solve the mystery.  But these criticisms are based on a questionable assumption that you will ever know exactly what happened.  It’s character building to accept that we may not, or so I tell myself to avoid insanity :)  If you really want to know, you have to have a rapid response team and get out there while the animals are sick but not dead, maybe even sacrifice some in order to get a good diagnosis and understand the problem better.  That’s a controversial idea, but as Ellen Ripley said it’s the only way to be sure.

Expect more.  Whatever the proximate cause of the Peruvian mortality event, society should expect these sorts of things to happen more often as the global climate system continues to change.  In the oceans, perhaps even more than on land (water holds more heat energy than air and the ocean is absorbing a disproportionate amount of the greenhouse energy imbalance), environmental factors drive disease processes, and there are a whole suite of emerging or re-emerging diseases that are undoubtedly showing up with greater frequency and intensity than in the past.  This process will continue.

3 Replies to “What is Peru’s dolphin and pelican die-off telling us?”