Recently Chris Mah, that most passionate advocate of all things with pentaradial symmetry (i.e. echinoderms: urchins, starfish etc.), wrote an excellent blog post about how starfish tube feet don’t work the way you think they do.  He was right, at least in my case; I had always assumed that they were suckers, and that the adhesion of a starfish to a smooth surface was essentially the sum of a few thousand tiny suction cups.  The truth, as he elegantly illustrates, is that the tube feet are more like tubes of glue – secreting at least three different adhesive molecules into the tiny space between the foot and the surface.  I urge you to go and read his whole post, it’s tops. 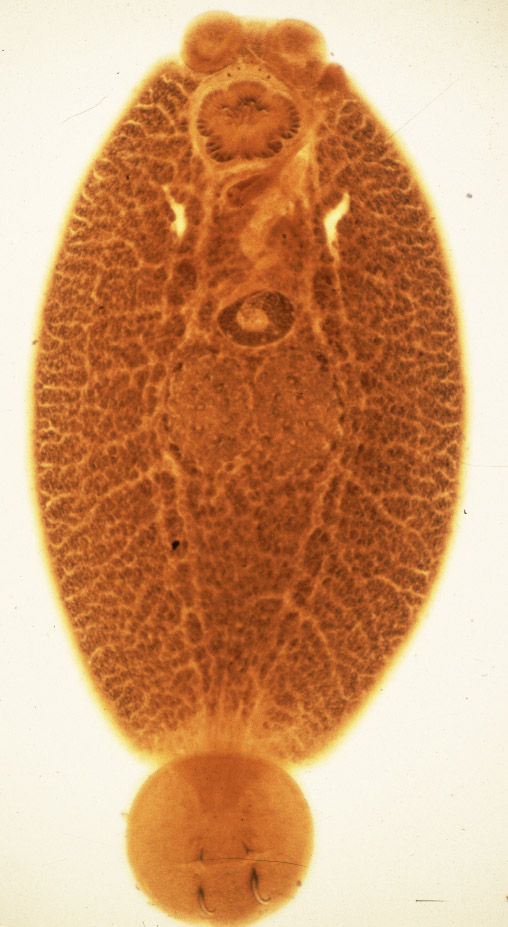 As I read Chris’ post I was immediately struck by the convergent similarity with monogenean platyhelminths (of course I was.  How could you NOT be, right?  OK fine…I’m a worm nerd…shut up).  These are a class of entirely parasitic flatworms that live on the external surfaces of fish, sharks and rays. Specifically, the attachment method of starfish tube feet is very similar to that used by capsalid monogeneans to stick to their fish hosts.  If you think about it, this may be an even taller order than that faced by the starfish: fish skin is wet, it’s covered by a constantly sloughing layer of mucus, and the whole shebang is moving through the water all the time, which adds an element of drag that must be overcome if the worm is to stay attached.

To achieve this, capsalids have not one but two attachment organs.  At the back is a large sucker or haptor (at the bottom in the adjacent pic), which has a giant pair of central cantilevered hooks, a flap or valve around the edge and a ring of tiny hooks at the periphery (too small to see in the photo).  The whole thing acts much like a tent, where the central hooks act like tent poles, the valve is like the fly layer on the tent, and the peripheral hooks are like the tent pegs around the edge of the tent.  As the central hooks dig in to the skin, and lift up the center of the haptor, suction is created, with the seal maintained by the flap (or valve) and the tiny hooks that hold it to the skin.

That’s all well and good, but not very similar to the starfish deal, right?  You’re right, the similarity there is with the other attachment organ that capsalids have, at the front end.  These, variously called lappets or cephalic lobes, are 1 or 2 flat pads that the worm uses to temporarily attach to the fish while the back end is detached and moved to a new location, inchworm-style.  Thus the method used by the lappets has to be effective but also quick.

Close examination of how the lappets do their thing using electron microscopy and chemical tests shows that it is an adhesive-based system.  In other words, the worms temporarily glue their front ends to the fish while they move the back.  There are at least two separate secretions involved: one that glues the lappet down (perhaps after reacting with components in the mucus), and a second, solvent secretion that releases the glue.   All of this takes place in a fraction of a second, serving to glue and detach the worm to/from a wet and mucus-covered fish skin so it can move along without being dislodge by the drag of water movement.  This has also been proposed as a key way to ensure that the worm finds the right host – if it tries to glue to the wrong host, the chemicals don’t react properly and no adhesion occurs,  Surely a remarkable attachment method like this has some industrial applications?  Well maybe, time will tell, but it’s certainly a great example of the guiding principle that pure science is just applied science waiting to happen.

Conceptually, both starfish and flatworm use an epoxy-type approach, where multiple secretions are mixed to react together and create an effective chemical bond, which is then released on command by a different, solvent secretion.  In both echinoderm and flatworm, which are only very remotely related, evolution converged on the same solution for temporary adhesion in the marine environment, with remarkable, almost instantaneous bonding and release that equals or exceeds the best humans have come up with.  Whenever that happens, biologists should sit up and take notice, because it tells us something profound about the best solution for a given problem among the many challenges of successful life in the sea.

4 Replies to “A sucker for convergent evolution”