At the end of the F line in Coney Island, Brooklyn stand three of the city’s more venerable institutions: Nathan’s Hotdogs, the Cyclone roller coaster and the New York Aquarium, part of the Wildlife Conservation Society (once known as the NY Zoological Society).  I like roller coasters and hotdogs (a little too much), but I started my career at NY Aquarium back in 2000, when I served on the curatorial team as aquatic pathologist.  I still have good friends working there, which was why it was so hard to hear about the damage that the storm named Sandy did to the facility.  The Aquarium’s “Sea Cliffs” exhibit was particularly hard hit because it is sort of tucked under the boardwalk on the landward side.  When water overtopped the boardwalk, the exhibits and the viewing galleries were flooded, and so was the mechanical and electrical space behind them.  Loss of power also wreaked havoc on life supports systems across the facility.  Several staff, whose own houses had been damaged or destroyed by the storm, set up makeshift camp at the aquarium and worked around the clock to preserve that which could be salvaged and begin the immense process of cleaning up. 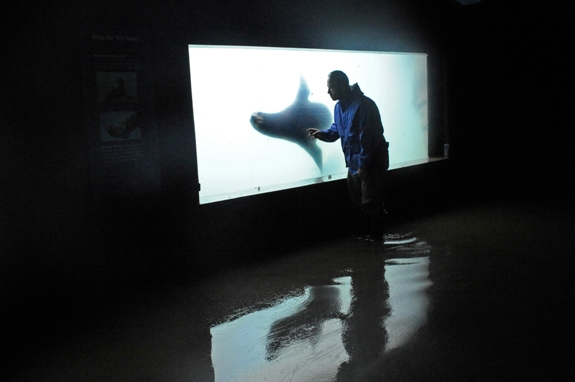 Operated as it is by a non-profit entity that specialises in conservation, the aquarium doesn’t have a lot of resources on which to draw for the rebuilding process.  If you live in the tri-state area you can still help, though, and all you have to do is drink beer!  Not just any beer, but the most excellent  hoppy froths of the Brooklyn Brewery Company.  If you live near there and can make it, I urge you to go to THIS EVENT on January 23, listen to a talk from the Aquarium’s director and blow the tops off a few frosty ones in the name of rebuilding the longest operating aquarium in the US.

Won’t you think of the fish???