This is OCEAN THUNDERDOME!  We pit two marine mammals, the Southern Elephant Seal and the Narwhal, against each other in an epic battle for marine sampling supremacy.  These two creatures are some of the brave and the few that are specially selected to be living instrument platforms. In other words, we stick fancy oceanographic instrumentation like miniaturized CTDs onto them. These creatures can go deeper and farther than our human-engineered deep diving contraptions (suck it James Cameron!). Plus they work for fish. Now, their epic battle for ocean dominance finishes here.

Both these creatures sport headgear. The impressive tusk of the male narwhal is actually a giant mutant tooth, which they use to lure in the ladies. While human females may use their impressive headgear to attract the males at Churchill Downs, I’m thinking looking like an aquatic dalek doesn’t work quite as well for seal ladies.

What girl can deny that irresistible tusk?

Narwhals are equipped with temperature and depth sensors, while Elephant Seals are have temperature, pressure AND conductivity.

Investigating mah oceans with much squee.

Both of these badasses have been observed diving over one mile deep (1800m). But during the summer, Narwhals like to stay shallow, usually hanging during 0-50 meters. During the winter is when they make their deep dives.  And these dives from 800-1500 m are nearly vertical, making beautiful profiles of temperature and depth. Elephant Seals ain’t got nothing on the Narwhal’s gold medal dives as theirs are generally shallower, only going down from 400-800 m.

WINNER: Narwhals, for winning the sprint. 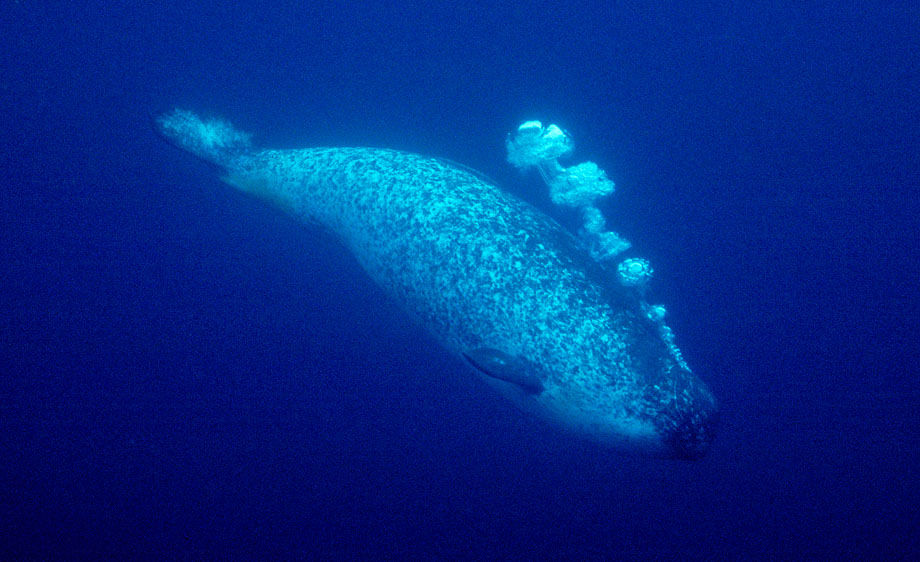 Seals win this hands down. Seals swim around for up to 80 minutes underwater, while Narwhals can only hold their breath for up to 25 minutes. In addition, seals make over 40 dives a day, spending more than 90% of their day underwater and traveling up to 4000 m vertically. Seals make what are called ‘drift dives” which means they dive down deep, then just hang and chill drifting with the currents. And even cooler, scientists can estimate body fat from their float profile. Thin seals tend to sink while fat seals tend to float. Those lazy Narwhals only spend about 3 hours underwater daily and make about 18 and 25 dives per day.

Just holding my breath for the next 80 minutes.

Let’s face it, if you want to be a successful oceanographic sampling force you need an army.  And this is where reproduction comes in. You need to attract the ladies to make some more minions. As mentioned earlier, Narwhals tusks are used as a lady magnet.  Channeling their inner Barry Manilow, they sing “strange, sad songs” and cross their tusks to impress their female audience. In comparison, elephant seal mating rituals are a trainwreck. The males fight and honk at each other using their giant overgrown noses to assert their dominance and win over the ladies. I am *swooning* over here.

WINNER: Narwhals, due to their slick style. Hear them croon here http://narwhalnewsnetwork.com/what-does-a-narwhal-sound-like/

Our intrepid explorers aren’t just instrumented for fun, they are instrumented FOR SCIENCE!  So what have these ocean rovers found?

Narwhals cruise all around Baffin Bay, which is between Greenland and Canada, sampling away for science. Their special contribution to oceanography is their ability to swim under ice, an area which is notoriously difficult to sample. From the data, scientists were able to figure out the water in Baffin Bay that flows northward along Greenland’s coast is warming. This may affect sea ice coverage and suggests that there is a change in the climate of Baffin Bay. This water eventually flows southward into the Labrador Sea, where the added warmth may hinder the formation of North Atlantic Deep Water whose generation drives global circulation.

Elephant seals are the samplers of the Southern Ocean surrounding Antarctica. It is around this lonely outpost of a continent where Antarctic Bottom Water, a cold and salty water mass found at the bottom of all the world’s ocean, is formed. Scientists knew where 3 of these surface sources of Antarctic Bottom Water were located. But there was a fourth, unknown source. Researchers guessed it was a polynya (open water surrounded by sea ice) off Cape Darnley, however they were unable to get there during wintertime when bottom water formed. And this led to the elephant seal’s moment of glory. The seals fed in this area, diving down and profiling through the sinking Antarctic Bottom Water formed at the surface. Using data from both the elephant seals and a mooring they had placed there the previous summer, scientists were able to prove that particular polynya was the missing source. But even this new source could not account for all that was formed, meaning there are more sources!  Clearly, the elephant seals job is not done.

WINNER: Seals. Because it’s not every day that you find a source of bottom water. And cheers to the prospect of them finding more!

The narwhal bacons at midnight.

i haz a bucket.

WINNER: Seal. Because Bacon Narwhal is both an exploitation of Narwhals and Bacon and possibly Jalapeno Jack Cheese. And it is gross. REALLY REALLY GROSS.

It was a valiant battle. But in the end, the Seals won 4 rounds, while the Narwhals only won 3.  I declare Southern Elephant Seals to be the Champions of Ocean Sampling!

Now that I belligerently rule the oceans, OBEY ME HUMANS.

2 Replies to “Battle of the living instrument platforms: Elephant Seals vs Narwhals”