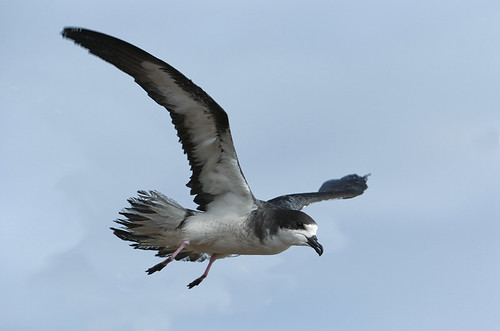 Meet The Hawaiian Petrel (or ʻUaʻu or Pterodroma sandwichensis) a bird species endemic to the Hawaiian Islands but with an appetite causing it to dine on squids, fish, and crustaceans from around the Pacific.  A single individual may take off on a 10,000 kilometer (>6,000 mile) trip just to feed.  Similar to those midnight runs to Krispy Kreme in the city hours away, when I was more youthful and my metabolism higher.  And much like my waste reveals that love of Krispy Kreme, Hawaiian Petrels so to show their diet.  The chemistry of the Hawaiian Petrel’s tissues, much like any animal’s, tells the story of this biologically and geographically diverse diet.

Both carbon and nitrogen can exist in a number of different isotopic forms with relatively lighter and heavier weights.  For example, most carbon is present as 12C, with approximately 1% being the heavier 13C.  The ratio of these isotopes is altered by both biological and geological processes.   For carbon, differences between 12C and 13C indicate different food sources based on different primary producers, i.e. plankton verses bacteria verses algae.  Nitrogen isotopes can tell us where a animal sets in the food chain, i.e. its trophic position.  Organism are much more likely to excrete, or urinate, the lighter  14N than 15N.  Thus an animal’s tissues accumulate 15N which is passed along to predators.  Higher up the food chain the higher the 15N.

Anne Wiley and colleagues discovered something astonishing when they examined 250 specimens spanning the last 4,000 years.  For 3,500 years everything was static.  The distint populations of Hawaiian Petrels on the different Hawaiian Island had a diverse set of diets from a diverse set of areas.  Birds on Hawaii and Lanai fed slightly higher on the trophic totem pole than those from Maui and Oahu. However, more recently, especially since 1950, something radical has taken place.  Despite the island they call home, all Hawaiian Petrels now feed on a very similar food source. In the last 100 years nitrogen ratios have declined by 1.8 parts per thousand.

Why the decline? Most likely industrial fishing.  Declines in trophic postion, decreasing nitrogen ratios have been seen in other birds as fishing pressure increases and fish prey decrease. As more predatory fish have declined, Hawaiian Petrels are forced to feed lower down the food web.

5 Replies to “An overfishing story told by bird collagen”