I recently received an email from a colleague asking for a copy of a recent paper. In return, they sent me a plot of inertial current circles from 1965 along with this intriguing image. First thought…OMG it’s the french version of R/P FLIP! But after clumsily wading through a bit of french text with the help of google translate, turns out it’s more like a first cousin. In 1962 (the same year FLIP was launched), Jacques Cousteau convinced the French government to build their very own permanent floating research platform. BORHA was moored in the Mediterranean with a full-time crew of 2. And with room for 6 more, this thing was made for the ocean scienceing: marine biology, physical oceanography, atmosphere-ocean interactions, you name it.

Alas, BORHA was also beset by a series of catastrophes. After an onboard fire in 1965, it spent a year at the docks undergoing major repairs. It was then redeployed and stayed afloat until 1970 until a series of storms damaged it so badly it was decommissioned. A more massive descendent BORHA II was built and deployed in 1973 to replace the original buoy. But with the advent of satellite technology the limited spatial capabilities of the mooring deemed it obsolete and it was brought back to port only 3 years later. Apparently, the son of BORHA was recently resurrected to serve the French shipping industry, but in what capacity I have no idea.

Bad luck aside, most endearing about the original French Buoy Lab are the photos of life aboard. Like the French, this floating research lab just has style. Just check out these images of life aboard a research buoy in the 60’s.

No suit, no helicopter, no science.

Boarding via treacherous ladder is also acceptable, but only while clutching a knife in one’s teeth. 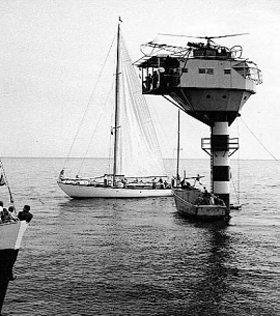 Or if you must, the yacht will suffice. Once onboard, adorable hats, sweaters or really anything or nothing is appropriate.

And of course, beautiful postcards to send to your envious friends.

These images and more can be found at: