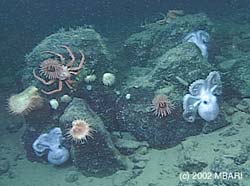 It had been assumed for a century before that the deep-sea fauna was depauperate, and prior to then that the great depths were essentially sterile. These ideas were largely a carry over from Edward Forbes in the late 1800’s, who proposed the azoic hypothesis for the deep sea. Interestingly, his idea was largely based on samples from the Aegean Sea now known to have relatively low densities of organisms compared to other deep-sea areas. The lack of deep-sea life was overturned by several later reports of deep-sea species attached to sounding lines and the dredging cruises of the H.M.S. Lighting, Porcupine, and Challenger. In 1968, Sander’s comparative study of marine benthic diversity, showed that bathyal diversity exceeded coastal diversity in the temperate zone and approached shallow-water tropical diversity. The development and deployment of more effective sampling gear has indicated that diversity is probably even higher than Sanders estimated, potentially rivaling that of tropical rain forests. On relatively small scales, the number of species coexisting in the deep sea is surprisingly high, exceeding 300 macrofaunal species m-2 at bathyal depths in the western North Atlantic. The greater diversity in what appears to be a more homogeneous environment has long perplexed marine ecologists and remains a major theoretical challenge. Numerous hypotheses have been proposed including competition, facilitation, predation, disturbance, productivity, environmental heterogeneity and patch dynamics.

Further papers on deep-sea diversity (in no particular order)

Snelgrove PVR, Smith CR (2002) A riot of species in an environmental calm: the paradox of the species-rich deep-sea floor. Oceanography and Marine Biology 40:211-242

Gage J (1998) Why are there so many species in deep-sea sediments. Journal of Experimental Marine Biology and Ecology 200:257-286

Share the post "ARCHIVE: 25 Things You Should Know About the Deep Sea: #4 The Deep Sea Has Extremely High Species Diversity"