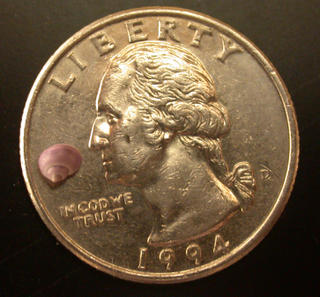 In one of the earliest papers on the deep-sea fauna, Mosely (1880, p.593) noted, “Some animals appear to be dwarfed by deep-sea conditions.” Almost a century later, Hessler (1974) noted that “individuals of certain taxa are routinely so small that they are of meiofaunal size.” Thiel (1975, p. 593) echoes these comments by noting the deep sea is a “small organism habitat.” Consider that the entire collection of deep-sea gastropods from the western North Atlantic collected under the WHOI’s Benthic Sampling Program (44 samples, 20,561 individuals) would fit completely inside a single Busycon carica, a typical-sized New England knobbed whelk (McClain et al. 2005). Many studies explicitly testing deep-sea dwarfism measure the mean weight per individual (MWI) within a sample. This metric is calculated by dividing the total biomass of the sample by the total abundance. In most of these studies an order of magnitude reduction is seen in deep-sea faunas compared to coastal/shallow water faunas (Gage 1977, Shirayama 1984, Pfannkuche 1985, Tietjen 1992, Vincx et al. 1994). Recently McClain et al. (2005) noted that the average shell size for deep-sea gastropods off New England is statistically smaller than those on the adjacent George’s Bank (8.2mm vs. 21mm). In this same review, McClain et al. (2005) demonstrate that this same trend is recapitulated at the family level. 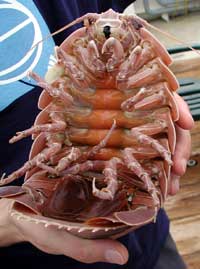 In stark contrast to the above patterns some deep-sea arthropods exhibit deep-sea gigantism (Timofeev 2001) including giant isopods, amphipods, and pycogonid “spiders”. This too Mosely (1880, p.593) noted, “Other [animals] attain under them gigantic proportions. It is especially certain crustacea which exhibit this latter peculiarity, but not all crustacea, for the crayfish like forms in the deep sea are of ordinary size. I have already referred to a gigantic Pycnogonid [sea spider] dredged by us. Mr. Agassiz dredged a gigantic Isopod eleven inches in length. We also dredged a gigantic Ostracod.” Gigantism in the sea spiders, was also noted by other researchers at the end of the 19th century, “From experience in this and previous seasons the moderate depths of the Andaman Sea in its southern half appear to swarm with life. Station 114 (922 fathoms) in the Andaman Sea must have a special word of notice. The trawl-bag here again came on board choked with cold mud, out of which a gigantic specimen of Colossendeis gigas, Hoek, was washed alive.” (Wood-Mason and Alcock, 1891, p. 17).

What leads to this drastic miniturization/gigantism of deep-sea organisms? Most researchers have attributed the reduction in body size to decreased food availability in the deep sea. Deep-sea communities are completely reliant (with the exception of seeps and vents) on detritus sinking from sea surface augmented by the sporadic large food fall (dead whales, dead plants, etc.) and terrestrial input. The fraction of food arriving at the seafloor is thus both small and decreases with distance away from productive coastal waters. If food limitation is driving body size we would expect size to decrease with increasing depth. This pattern is well-documented among broad community components (i.e. among all the species in the habitat, individual taxonomic groups actually display mixed patterns). But why do arthropods obtain large sizes? A number of hypothesis have been set forth including increases in oxygen availability (Chapelle and Peck 2001), release from predation, and cold temperatures leading to longer lifespans and slower growth rates (Timofeev 2001). Yet the true unsolved paradox is why miniaturization and gigantism both occur. What is unique about the ecology, behavior, physiology of crustaceans that have allowed these increases in size?

Interesting a very similar pattern is seen on islands with species exhibiting both giant and miniature forms compared to their mainland relatives. This size disparity has been shown to relate to the original size of the mainland fauna, with larger organisms showing reduced size on islands (pygmy hippos, elephants, humans, etc.) and smaller organisms increasing size on islands (mice, rats, lizards, etc.)

Share the post "ARCHIVE: 25 Things You Should Know About the Deep Sea: #7 Most Deep-Sea Organisms Are Miniatures of Their Shallow Water Relatives"