Laser line scan mosaic of a pool of brine surrounded by mussels at a depth of 700 meters in the Gulf of Mexico. From here.

What is a brine pool?

A brine pool is a volume of hypersaline (~4-5x) water that is denser than the surrounding water forming anywhere from a puddle to a lake on the seafloor with a distinctive shoreline and surface. They are common in the Gulf of Mexico.

At the shore of the brine pool, the mussels form dense ‘reefs’.  In this picture you can see a float marking one of [the] study sites.From here.

How do brine pools form?

Brine pools are formed by salt tectonics.   During the Jurassic, the Gulf was shallow sea that dried out producing a thick layer of salt up to 8km (~5 miles) thick.  As the Gulf reopened to other oceans it filled with seawater.  The salt layer, being already covered with sediment and continuing to be covered through subsequent sedimentation, was preserved.  As the overlying sediment became heavy it deformed the salt layer, causing movement (salt tectonics).  Often the salt layer penetrates through the sediment creating a dome or gets squeezed out, causing sediments to drop. When the salt hits seawater if forms a hypersaline volume. Sometimes but not always, salt migration upward also penetrates hydrocarbon deposits.  At the surface this forms a brine pool in which methane bubbles from. [Information from Lakes Within Ocean, Bob Carney] 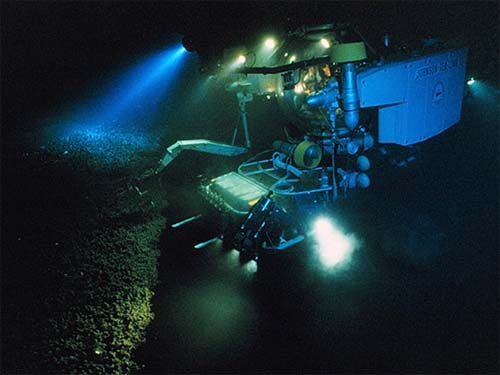 What organisms are associated with brine pools?

The shores of some brine pools are lined with mussels that possess symbiotic chemosynthetic bacteria that utilize the methane and turns into a usable carbon sugar. The sediment surrounding the mussel bed is also often covered with bacterial mats.

[Comments from K. Zelnio. The density of mussels there is outstanding! From Smith et al. 2000, mussels closer to the pool of brine are typically younger (shorter in shell length) and can reach densities of greater than 2250 individuals/square meter. The thickness of the mussel bed surrounding the pool varies between 3-7 meters thick. Some interesting critters living in the mussel bed include the shrimp Alvinocaris stactophila and the neritid gastropod Bathynerita naticoidea. The orbiniid polychaete, Methanoaricia dendrobranciata (the methane-nymph with branched gills; Blake 2000), was described from the brine pool mussel bed. There are other gastropods, munidopsid crustaceans and scaleworms (see Bergquist et al. 2005).]

Can we penetrate the brine pools?

It requires a submersible to down thrust to actually penetrate one of these pools. Equipment, such as a submersible, can actually float on its surface.

Do we know if anything lives in the pools?

The hypersalinity is lethal.

The crabs and urchins placed in the pool are essentially “pickled”. The crab came up after 8 years with soft tissue still intact. The crab carapace has lost some of its calcium carbonate and instead of being hard is somewhat rubbery. This has possible implications for fossil preservation.

[Comment from K. Zelnio: While no metazoans may live in the pool, there may be bacteria living at or near interfaces of salinity within the pool. A geochemist colleague suggested this once but I don’t think its been tested.]