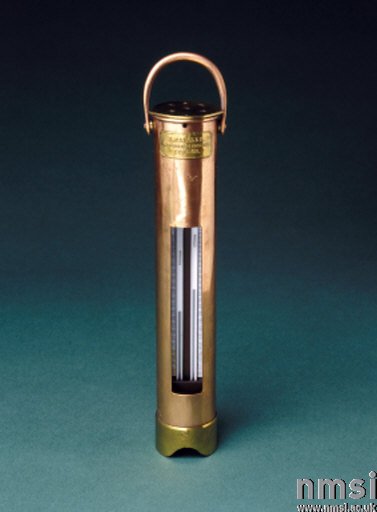 James Six (1731-1793) retired early from business to devote himself to the natural sciences. He is best known for the invention of the self-registering thermometer, first designed in 1780, which recorded the maximum and minimum temperatures reached. It was the most widely used thermometer for taking deep-sea temperatures until 1870. The thermometer’s susceptibility to pressure was addressed in 1869 by Dr W A Miller (1817-1870), then Vice-President of the Royal Society. Miller’s adaptation of Six’s design was made by the instrument maker L P Casella (1812-1897).

The bathythermograph is an instrument widely used to record the ocean temperature at various depths. It would be lowered from a moving vessel on a specially constructed cable and recorded the ocean temperature and the associated water pressure. Until the development of this thermometer, the thermocline (the layer of rapid temperature change between surface and deep water) had not been understood. The bathythermograph was able to show the structure of this layer more readily than could be achieved by measurements using a water bottle and thermometer. This instrument was made by S G Brown.