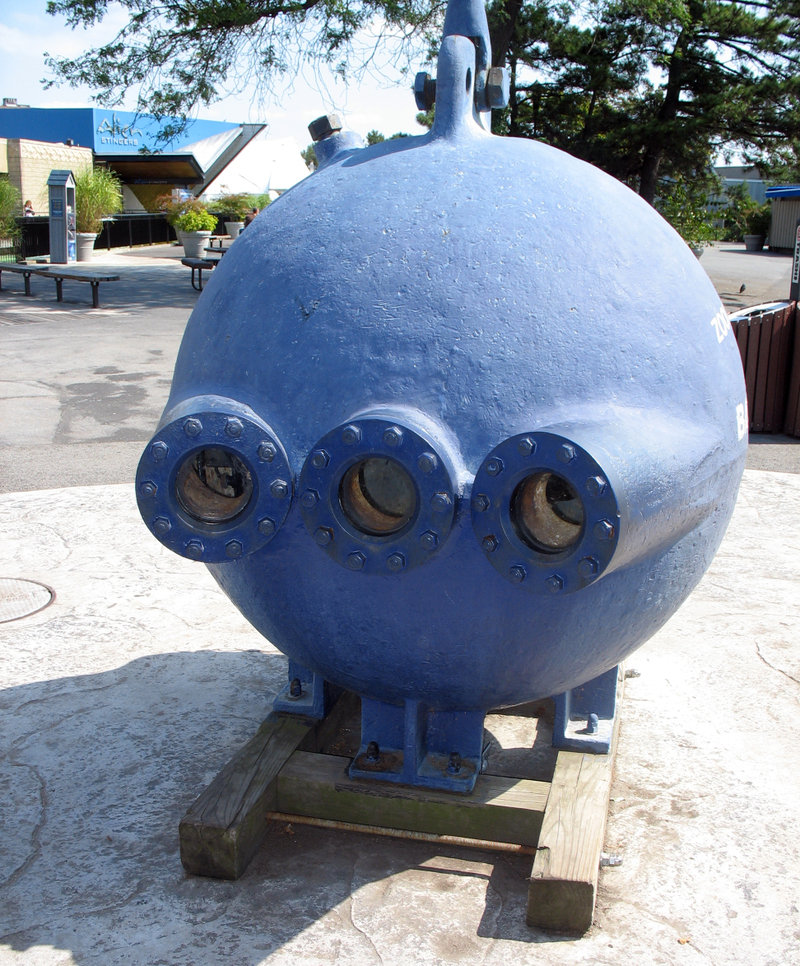 In 1932 two men became the first to descend into the deep sea.  Their descent, in nothing more than hunk of steel, took them past 3000 feet into the dark depths.  There is fine line between the courageous and the crazy.  Beebe and Barton’s dive may have been a bit both, as both trusted their lives to new-fangled equipment and methods to protect them from 100 atmospheres of pressure, being lost to the deep, or asphyxiating from a lack of oxygen.

However, the day those two men climbed into that tiny…impossibly tiny..hunk of steel and went half a mile down represents one of the most pivotal moments of oceanography, exploration, and human advancement.  Almost eighty years later our methods, our interest in, and technology for exploring the deep can be traced back to Beebe, Barton, and a hollow steel ball.

That hunk of metal is named Bathysphere and its genius can be
attributed to Barton’s design, a simple steal sphere to be lowered on a
cable costing no more than $15,000.  But that humble sphere was
forgotten often out of public view.  In 1939 during the World’s Fair it
was displayed briefly.  During World War II the Navy in experiments to
measure the effects of underwater explosions harshly treated it.
Little is known of its years from 1957 when the New York Aquarium (NYA)
moved to Coney Island or how it was displayed.  In 1994 the Bathysphere was
removed during renovations where it “languished in a storage yard under
the Cyclone roller coaster” on Coney Island until 2005.  Fortunately,
the NYA gave her a new coat of paint and new home where you can visit
the old girl today. A fiberglass model can also be seen at the National
Geographic Society in Washington but the real one is a block from
Nathan’s Famous Hotdogs in the Big Apple. Sorry Jim.

I met aquarium curator Paul Sieswerda who last week graciously
showed me around the NYA on Coney Island. We traded what we knew about
Beebe, Barton, and Bathysphere.  Paul’s admiration for that
steal sphere is no less than my own.   I was amazed by the smallness of
the internal compartment that challenges the laws of physics to
comprehend how two grown men and equipment fit inside.  Seeing the
Bathysphere was no less than a religious journey for me and I offer my
deepest thanks to Paul and the rest of the NYA for hosting me. The
Bathysphere and the NYA is definitely worth the hour and half subway
ride out Coney Island if you find yourself in New York.

I end with a note on the future of the Bathysphere.  I freely
admit my bias here, but I had hoped to see her displayed more
prominently.  I don’t blame the NYA what they accomplish with limited
facilities, poor location, and small budget is phenomenal.
However, the Bathysphere is no less than an Apollo capsule or the Flyer II of
the Wrights.  The latter, both prominently and proudly displayed at the
Smithsonian, mark our explorations of the air above and space beyond.
The Bathysphere marks humans first manned exploration of the
deep ocean.  The first time human eyes witnessed the deep.  There is no
fanfare for the Bathysphere, no key chains or swag at the
aquarium gift shop to commemorate her, and no mention of her in any New
York City guidebook.  She is displayed but perhaps forgotten.

For more information on Beebe, Barton, and the Bathysphere pick up a copy of Matsen’s wonderful book Descent.

9 Replies to “Necessary Admiration For A Hunk of Steel”