Sure Sphere is a filthy piece of literary swill but spheres are also a vital component of any submersible. As you may remember from geometry, for any given volume, a sphere has the smallest surface area, or for any given surface area, a sphere will have the greatest volume. From a practical standpoint for a deep-sea submersible, this means less surface for pressure to act upon. Thus the choice for the ‘large’ compartment to hold humans on a deep diving submersible is a sphere. 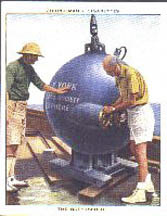 The first deep-diving sphere was the aptly named Bathysphere by Barton and Beebe, making its first unmanned test in 1930.

William Beebe dreamed of exploring the deeper locations where he and his air hose tether could not reach. He said that based on "sketchy recollections" with Colonel Theodore Roosevelt, the idea for a spherical deep-sea vessel came from Roosevelt who drew a sketch on a napkin while the two chatted together about exploring the ocean depths.

The Bathysphere was made by the Watson Stillman Hydraulic Machinery Company in Roselle, New Jersey. Made of cast iron, it could hold two people. The "walls" measured one and a half feet thick and were made of a single casting of the finest open-hearth steel. The Bathysphere and its cables cost Barton $12,000.

The deepest diving sphere was the one that hung below a chamber filled with gasoline. In 1960, the Trieste bathyscaphe descended to 10,900 meters in the Mariana Trench. Big enough to hold just two people,

… the pressure sphere was built by the Krupp Steel Works of Essen, Germany, in three finely-machined sections (an equatorial ring and two caps). To withstand the high pressure of 1.25 metric tons per square cm (110 MPa) at the bottom of Challenger Deep, the sphere’s walls were 12.7 cm (5 inches) thick (it was overdesigned to withstand considerably more than the rated pressure). The sphere weighed 13 metric tons in air and 8 in the water (giving it an average specific gravity of 13/(13-8) = 2.6 times that of sea water). The float was necessary because the sphere was dense: it was not possible to design a sphere large enough to hold a man which would withstand the necessary pressures, yet also have metal walls thin enough for the sphere to be neutrally-buoyant.

Modern spheres are a whole other ballgame. Harbor Branch Oceanographic Institute’s submersible contains a solid acrylic sphere allowing scientists exceptional views. These views come with a price as it limits the Johnson Sea-Link to relatively shallow depths (>1500m). The more familiar Alvin, soon to be replaced, possesses a titanium sphere. As you can see from the figure below, the sphere rests forward and most of the external shell of the Alvin contains ballast and syntactic foam to regulate buoyancy. The sphere in modern submersibles can be released from the rest of the body in emergency situations to return to the surface. Jim Richardson has a thorough and excellent writeup with pictures at NavSource Online about another Alvin Class submersible the Sea Cliff (DSV-4). Included in that link is some wonderful photos of the entire construction process.