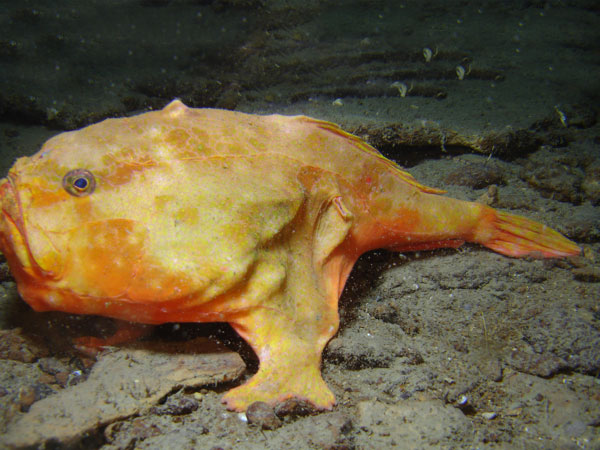 Meet the red-eyed gaper, Chaunax sp., more commonly known as "by-catch" in commercial fishery operations. Gapers are Lophiformes, in the anglerfish group, with big heads, a network of open sensory canals,
and a lateral canal extending posteriorly along a compressed trunk and tail. They are sit-and-wait, ambush predators.

If Dr. Seuss’ s original environmental story "The Lorax" had been
called "The Chaunax," the narrative would have been slightly different, with bottom trawl fisheries mowing down deep-sea corals to catch fish rather than foresters mulching Truffala trees to make fancy pajamas. Chaunax is like the Lorax of the Sea.

These red-eyed gapers and their ilk can be found as deep as 2000 m around the world. Here, one sits and waits for the robot to go away in 250 m of water in the Gulf of Mexico. The Tree of Life webpage has more information. This NOAA Ocean Explorer post by Doug Weaver describes deep fish in general. The video below aired here three weeks ago when Chaunax made his debut.- PJE