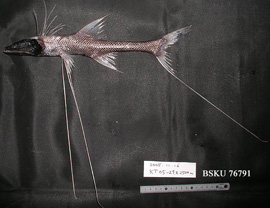 These would be awesome in an aquarium display. Like a Dali painting. But they would be tough to feed. Bathypterois aka spiderfish preys on small copepods and pelagic crustaceans. They are not visual predators. Their “enormously elongated” pectoral rays sense vibrations in the water column. Such big rays more than make-up for those beady little eyes, I suppose.

Both male and female gonads mature at the same time in the same animal. Mates are sparse, according to the BBC Blue Planet website, rarely encountered. But “if all else fails, one tripod fish can potentially reproduce on its own by fertilising its own eggs.” Hmm. I wonder if they have that on film. – PJE

Images from Planete-energies.com and Kochi University.