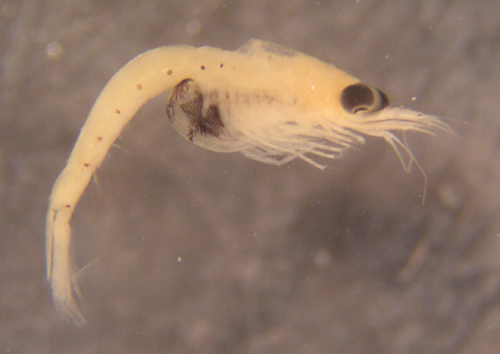 I found this cute little shrimp baby while sorting through mussel and snail bed collections from hydrothermal vents at the Eastern Lau Spreading Center (situated quite comfortably between The Kingdom of Tonga and Fiji!). It was a bit peculiar to me though.

Answers are below the fold!

The first answer was the easy one. It still has its larval yolk sack attached! The gills on shrimp are in fact under the carapace (the exoskeleton just behind the bulging eyes), not enclosed in the yolk sack. Yolk sacks provide nutrients in this case until the shrimp is able to feed efficiently on its own.

The second question was a little tougher. The eyes are a dead give away though. Vent shrimp in the family Alvinocarididae have little to no eyes. Actually, in several genera they are fused together and the carapace has grown over them. In one genus, Rimicaris, they are reduced even further to a mere "eyespot" on the back of the shrimp. It is hypothesized that Rimicaris can sense infrared radiation with its eyespot, which is given off by the heat of the 300+ C hydrothermal vents where it lives. This may be how they located the vents and know how to stay away from the hot water openings.

The third question is a little speculatory, but has to do with the eyes again. The big bulging eyes of this juvenile are an indication it probably can sense some light. So it is likely a midwater shrimp. It is common to get a little contamination from midwater as the submersible comes up. Especially with larvae and tiny hyperiid amphipods. So you have to really know your critters so you don’t report a ridiculous discovery, like a midwater shrimp from a hydrothermal vent collection. Granted there are a few species of shrimp with developed eyes that live near vents, sometimes in the low temperature areas (2-12 C), such as 2 species of Lebbeus in the Pacific.