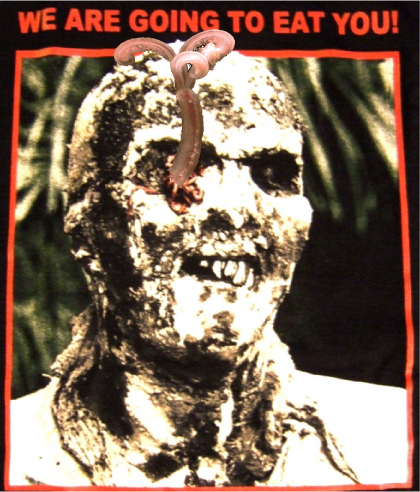 BONEZ1!! WE WANTZ UR BONEZ!! Perhaps the scariest deep sea creature, Osedax (latin for “bone devourer”) is a genus of tubeworm that lives on the carcasses of whales that have fallen to the seafloor. It lives off of mining the lipids in the whale’s bones using “root”-like structures. THEY WILL EAT UR BONEZ!!1! I would not want to fall to the bottom and meet these little guys. Of course it takes a while before the worms settle in. First the sharks and hagfish have to strip away all the flesh (see video below the fold to find out what happens to all those drunken sailors, note fuzzy stuff near end).

Photo montage of whale fall courtesy of MBARI. Red fuzzies are the plumes of Osedax.Not only do they eat whale bones, but they have a lifestyle that would strike fear in the hearts of any good christian family. You see, males are just parasitic little wormy sacks of sperm. They live in the oviduct of the female and live only to serve. And it is by no means a monogamous lifestyle. Each female might have up to 114 males prancing about inside of her. God knows what so many males do in one female. Surely nothing we would want our precious children to see.

Osedax from Monterey Canyon. Left picture shows the green roots and white ovary that is buried in the whale bone, courtesy of Greg Rouse. Right picture courtesy of MBARI.

One Reply to “The 27 Best Deep-Sea Species #2: Bone-Devouring Zombie Worms from Hell”