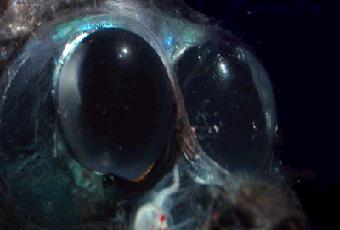 These fish are so cool they could be invertebrates.  First is that lovely family name which means behind the anus (opisthe-behind, prokotos-anus), a name whose intent escapes me.

Second, the 12 species in 6 genera are exclusively deep sea. Shallow water species can suck it! Third, all the species except one have tubular eyes that protrude from the skull, always gazing dreamily upwards. In Winteria (image left), the eyes look forward and up. Fourth, those crazy eyes have huge lens (yes size does matter) with an inordinate amoutn of rod cells and rhodopsin.  Fifth, they possess bioluminescent organs on their sides and stomachs that serves a counterillumination from below.