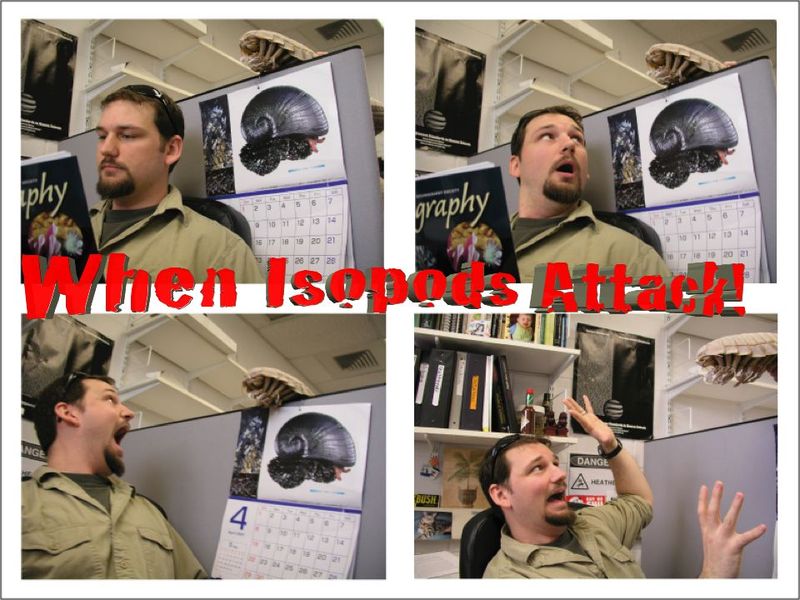 Beware the giant isopod. When it attacks you may not know it before it rips the flesh from your bone. If your a dead whale fallen to the seafloor that it. These are cool critters! The staff at Deep Sea News has a certain fondness for the giant isopod. We have written about them often and even a whole category dedicated to the Giant Isopod. Craig has also written about the academically and in the popular science press. Why do we love such grotesque creature? Because they are the relative of those tiny little roly-poly bugs you find under logs, just SUPER-SIZED! Although they have been known to invade strawberry gardens (see under the fold).

They are scavengers and eat just about anything that falls to the bottom of the ocean (see video below!) including, unfortunately, plastic which has been documented from gut content analyses. They live in burrows they make in the sediment. You can also find this big boy living just about anywhere in the deep sea, commonly between depths of 310-2140 meters.

I wrote an extensive article on Bathynomus a while back (with lots of photos), with a reply from Craig. Consequently, it is so cool that Craig may get it inked onto him permanently. Who here thinks he should do it?? I say it would be teh awesum! -KAZ