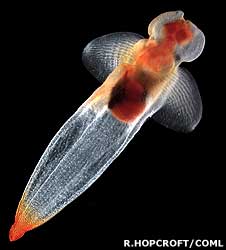 Two oceans couldn’t be farther apart. The Arctic and Antarctic Oceans have about 160 degrees of separation but Census of Marine Life scientists say they share more than 235 species in common. Most of them are not actively migratory fishes and birds, instead they are passively migratory invertebrates like the sea cucumber and sea butterfly Clione limacina, a swimming snail pictured left.

“There is continuity in the ocean as a result of the major current systems, which we call the ‘conveyor belt’; a lot of these animals have egg and larvae stages that can get transferred in this water.”

There is also the possibility that the “shared species” are superficial.

The traditional approach was to describe an organism’s physical features, so if these organisms lived in very similar habitats, did very similar jobs and ate similar food, then they often looked very alike even if they came from different origins.

Even though organisms look exactly the same and have been identified as being the same type by traditional methods, genetic information can reveal them to be a sub-species or different populations.

This is the International Polar Year. Listen to an interview with Dr. D’Or and read the full story about the bi-polar invertebrata-ta at BBC News. Watch Cliona in action, swimming on a Japanese game show here.