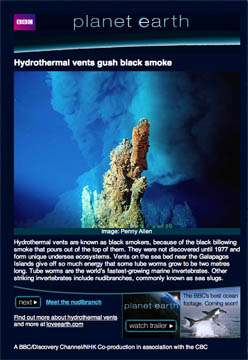 Ever since yesterday’s release of Google Earth 5.0, I have been trying to convince myself that playing with the new Ocean layer is part of my job. It seems to be working. I’m a graduate student who occasionally gives talks to high schools about deep-sea corals.

I’ve tried before to use Google Earth as a presentation platform. When the projection was right, I could spin the globe the Gulf of Alaska to the Gulf of Mexico effortlessly. We would go island hopping on the digital globe, jumping back and forth between the Powerpoint, the DVD player, and Google Earth. Now, I won’t have to. It’s all there together.

The bulk of the media content, however, is from traditional broadcast media. Videos, images, and articles are re-purposed in the new medium. This is what amazes me, what brings all this technology together into continuity. The same organizations that have been bringing oceans to life for fifty years are now showing up as icons on my globe. National Geographic, BBC Earth, and Cousteau’s Ocean World all contributed substantially the new Google Earth environment. It’s like broadcast media’s command performance.

Lest ye forget, National Geographic has two explorers-in-residence that plumb the ocean depths with state of the art equipment and technology. Dr. Earle is clearly the shepherd for this project, but Dr. Bob Ballard also makes a significant contribution. His videos of the Mud Vulcanoes in the Gulf of Mexico are terrific. His enthusiasm, inspirational. Dr. Ballard’s most famous discovery is the Titanic, of course, off the coast of Newfoundland. If I knew how to email coordinate locations from Google Earth, I would.

BBC Earth also makes a very stunning contribution. The “global tour” is biologically rich, with the beautiful images people expect from the oceans. Some are from Planet Earth, featuring  whale sharks in the Carribbean and deep sea hydrothermal vents in the Galapagos (see image). That wins big points around here. Clicking on the BBC icon in the Oceans layer zooms to a placard with image, text, some advertising, and an arrow bar that takes you, in turn, to the next placard, half a globe a way.

Altogether,  the new Google Earth 5.0 is a very handy presentation tool. I see a budding job market for .kml designers, and a new emerging definition for the term “globe trotter”. Next time I’ll focus on some of the tricks I’ve learned in Google Earth (exaggerate your seamounts) and introduce some of the other, less obvious contributions from people I may or may not know.

Could be somebody by the name of K. Alluicious Zelnio had a little something to do with … Ah, I’ll let him tell you about it!