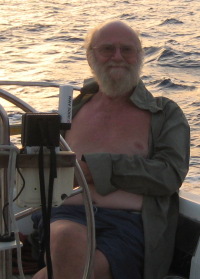 I received the sad news today that Martin Wells, imminent biologist, one of the founders of Churchill College at the University of Cambridge and, a great friend of the cephalopods and all marine invertebrates, has passed away at the age of 80. Son of H.G. Wells, Martin was a highly accomplished biologist who was especially inspired by cephalopods and other marine invertebrates. His wonderful book Civilization and the Limpet

portrays his love marine life. While aimed at the general audience, it should be, in my opinion, required reading for any future (or current) marine or invertebrate biologist, indeed it would be good for anyone with any interest in biology. The first time I sat down with it, I read it in one evening, it is that readable and good.

Wells’ papers were some of the first and most inspirational I read as undergraduate contemplating a career in Marine Biology.  His thoughts continue to influenced my own even as I moved away from cephalopod research.  I agree with Eric’s statement that Civilization and the Limpet is one of the best book written on the subject.  I have reposted my review of the book from last year…

Kevin was nice enough to send a copy of the Civilization and the Limpet by Martin Wells. Although aware of Well’s research, I was wholly unaware of this book. I triumphantly finished it yesterday and am admittedly impressed. The book is unabashedly Mollusc as Wells’ research is largely on Cephalopods. Much of the book also centers on physiology again because of Wells’ background. Each chapter is a stand alone narrative utilizing his experience to discuss adaptations in marine organisms and instill passion for the ocean. The book geared for the public possesses nuggets of wisdom even for well-read experts. One of my favorite chapters discusses the rise and fall of cephalopod rule of the oceans. Additional favorite passage is

Neither biological research nor college administration pays very handsomely, but when you come down to it, it is very marvelous thing that the world is prepared to pay at all for the like of us to spend so much of our lives in the study of anything so inherently interesting and outright beautiful as animals. In the bad times, I try to reflect on that. And there are bad times, just as in any other creative activity. Research is like painting pictures. The product hardly ever turns out quite as well as one might have hoped; it can be maddeningly frustrating; and one spends a lot of time simply cleaning up the equipment. But once in a long while everything goes really well, and this euphoric. And even in the bad time one is adding something, however slight, to the sum of human knowledge. Some poor people work just as hard and all they make is money.Definitely a recommended read.

One Reply to “Martin Wells”