Now that you’ve toyed with the new Ocean layer in Google Earth 5.0, and learned to dive below sea level, you’re asking yourself, … what’s next? Where can I go? What can I do? You’ve got the fever, and the only prescription is …. more cowbell ! 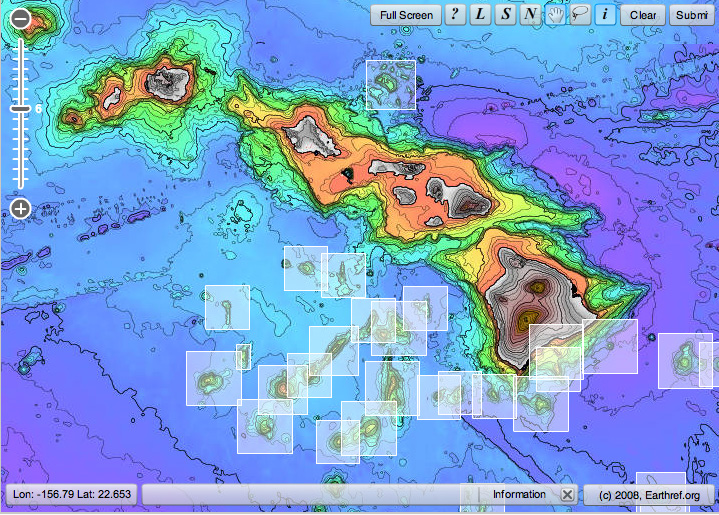 There’s been a lot of anticipation surrounding the Google Ocean project, but so far, we’re all still waiting. Meanwhile, applications are bubbling up through the blogosphere like methane though a cold seep. Ogle Earth and Just Magic have great summaries of available data.

Here, I list the top 5 ways to Pimp your Google Ocean so you can make your digital cyber-globe the deepest ride on the block in a snap.

2. Geographic names – This is a must-have accessory. A fundamental neccessity. Thanks to General Bathymetric Chart of the Oceans (GEBCO) at BODC, you can now put your finger on the D’Artagnon Canyon (not kidding) and the Mathematician Seamounts (Euclid, Pascal, and Laplace). Dates go wild for this stuff.

3. Next, you can use Alvin submersible dives to illustrate your next deep-sea mission. The .kml file will let you pinpoint each of nearly 5000 deep-sea dives around the world. Very sophisticated. This and other files are hosted by digital Mecca MGDS. You can explore.

5. Shipwrecks – To wrap it up the top reason to pimp your Google Ocean has got to be the doubloons, baby. The doubloons. We’re not talkin’ Benjamins. We’re talking sunken treasure. Look for gold among 1000+ European shipwrecks off the coast of France in the hot-links over at Just Magic. Its just sitting there waiting for you.

Hot stuff not ready to Google (not .kmz and .kml files):

1. Seamount Catalog– If there was ever a Google Ocean match made in heaven it would be the GEBCO underwater place names file and the Seamount Catalog over at the Seamount Biogeosciences Network. But alas, SBN is not ready to shake hands with Google Earth. Might even be a step down for this cutting-edge geophysical data network…

2. Japanese Deep Seafloor Image Database -Japanese science agency JAMSTEC maintains a photodatabase of more than 250,000 from the Shinkai, Dolphin 3k, and Kaiko submersibles. But its not georeferenced. What’s up with that? C’mon JAMSTEC, what are you waiting for? Pimp my ride.

6 Replies to “Pimp your Google Ocean”