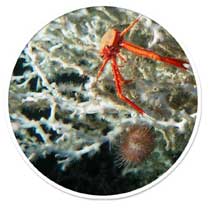 Image from Lophelia.org, a great resource for learning about deep-sea corals.

Forwarded this article from yesterday’s Guardian by a colleague.

To preserve the reefs, the South Atlantic Fishery Management Council, a federal panel that regulates recreational and commercial fishing from four to 320 kilometres (200 miles) offshore, is proposing to designate more than 37,000 square kilometres (23,000 square miles) of the Atlantic ocean off the south-eastern United States as protected areas.

Fishermen could still work the waters. But the protection would bar certain kinds of bottom-disturbing fishing gear and prohibit dropping anchors or traps that could damage the reefs. It could also help protect the area if offshore oil-and-gas exploration ever occurs there.

Deep Sea hero Steve Ross is seeking out protection for deep water reefs of the eastern seaboard. Coverage will even include reefs offshore of Cape Lookout, only a few tens of miles away from me! One of the major reef-building corals at these is Lophelia pertusa. A beautiful coral that provides important habitat for many types of fish. Alex Rogers wrote in a study in 1999 that Lophelia reefs in the North Sea were just as, and sometimes more, diverse as shallow coral reefs. Thee reefs can be very extensive and very old habitats, but are very slow growing. Off the coast of Norway, Lophelia reefs have been aged to roughly 10,000 years old, likely appearing soon after the last glacial retreat. For more on deep sea corals, check out Peter’s Coral Week round-up!