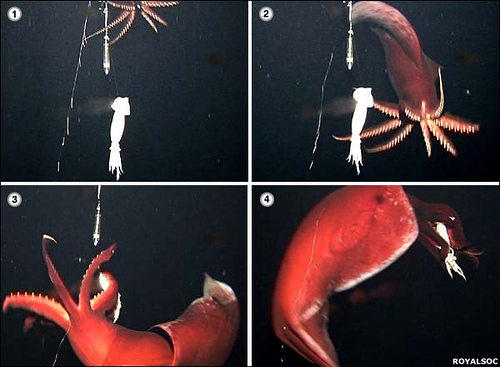 So was I thinking we could light a few candles, have some wine, and then...

Yeah, squids are freaky…real freaky freaks.  An article over at Practical Fish Keeping details the work of recent PhD Henk-Jan Hoving.  His dissertation makes mine look like rainbows and unicorns.  The thrust of his work was to study reproductive techniques in deep-sea cephalopods.

Males of Taningia danae cut females then insert sperm packets into them. Onykia ingens males have spermatophores that secrete enzymes to dissolve tissues of the female.

This observation was supported by a bizarre incident in Japan, where a diner had to undergo an operation to remove a spermatophore lodged in his throat after eating squid.