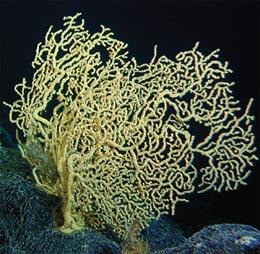 It hasn’t been too long since Brendan Roark first reported that deep-sea corals off Hawaii are clocking in as the world’s oldest animal. At four thousand years old, the Leiopathes sp. black corals beat the quahog clams, which live to be four hundred, and they beat the tortoise Jonathon, who’s 176. Of course, these deep-sea gold and black corals are colonial creatures, a little bit like the giant honey mushroom in Oregon that 35 miles across and 2400 years old. That means the individual polyps can die back, but the stalk remains for the polyps to recolonize. Here lies a bit of a conflict, which was published March 23 in the online edition of PNAS.

The polyps may have been feeding on re-suspended sediment, which could have a carbon signature older than the colony, not on photosynthesized carbon from surface waters. However, the carbon 14 in the polyps matches the overlying water column, indeed its been reported that the deep-sea corals are feeding on freshly minted organic material as young as five days old. That’s rapid transport to the deep-sea. Read more about the details from Roark’s colleague Dr. Tom Guilderson at Lawrence-Livermore National Laboratory. The investigation was teamwork from a broad group of scientists from Stanford, LLNL, UC Santa Cruz, and Hawaii Undersea Research Laboratories.

To credit the skeptics, once you take the carbon 14 out of the picture, not everything makes sense. Dr. Richard Grigg at Univ of Hawaii has been studying in-situ growth rates of black corals and gold corals since the mid-70’s. He’s perhaps the only person in Hawaii to have actually tagged a coral 400 m deep and returned to measure its radial growth. Grigg estimated these corals at 70 years. He told me once, “There’s one thing you can’t deny, and that’s reality.” Nature News gives credit to the argument that the animals ingest old and new carbon.

Part of the confusion lies in the fact that growth rings in the marine environment are not necessarily annual growth rings. Bamboo corals are relatively “weedy” deep-coral species, from 50 – 150 years old. These have subannual, or lunar, growth rings linked to plankton cycles (Roark et al 2005) or tidal fluctuations on seamounts. Gold corals may lay down their growth rings once a decade. The problem is there has been no longitudinal study measuring in-situ growth rates, current flows, and suspended sediments, so perhaps we’ll never know for sure.

Here’s a few things to consider. First, benthic cnidarians are one of the most basal groups in the tree of life, among the oldest metazoans, in the fossil record back to the Proterozoic. Let’s just say they’re highly adapted to their environment. Second, if you think about clonal marine organisms, you’ll eventually need to revise your definition of what makes a living thing. Anemones reproduce clones by pinching off little buds of flesh. They have been called “immortal” in the sense that their DNA lingers on even as the cloned individuals expire. How do you define old in this sense? Finally, there is evidence that some deep octocorals have expired, and their axis recolonized. The evidence is in the relaxed growth of a 300 year old bamboo coral (Noe and Dullo 2006). Did the colony ever die if it lived to grow again?

Either way, the carbon says these corals are old as the hills, my friends. Think about that next time you order the orange roughy. They trawl for that stuff, dragging up corals by the dozens.