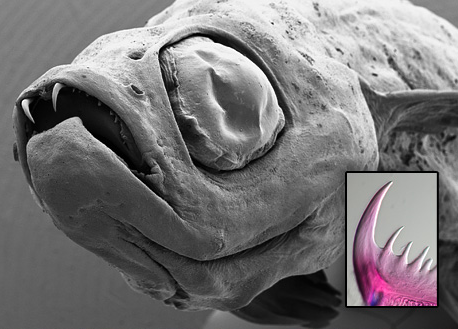 Not deep sea but awesome nonetheless! The Full story is National Geographic News.

“Despite their ghoulish appearance, the fangs likely aren’t used for feeding.

“We did not study stomach contents, but we know that its close relatives live on small crustaceans … and other small invertebrates,” Britz said in an email to National Geographic News. “In captivity it readily accepts brine shrimp [larvae], tiny nematodes, and even very fine flake food.”

Based on the behavior of live “Dracula” fish, the researchers think the males use their extra long fangs to spar with each other during aggressive displays. The findings are described this week in the online edition of the Proceedings of the Royal Society B. “