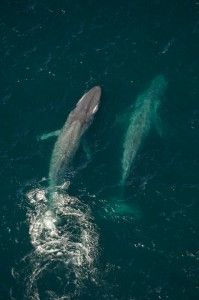 Tonight at 8pm eastern time, National Geographic Channel is premiering its new documentary Kingdom of the Blue Whale. After just previewing it twice this weekend, I have to say this is one you won’t want to miss! Filmed with 2 main story lines, expeditions from the Channel Islands in California to “the Dome” in Costa Rica and geneticists traveling to Japan to use forensic methods to uncover the true identity of whale meat sold in the local markets.

In true National Geographic fashion we are told a story in a calm, informative manner with entertaining footage, a well thought out storyline and a cast of die-hard researchers whose enthusiasm for the whale and for research is contagious. As much of a marine invert guy I am, blue whales have always held my fascination. They are so huge! Their heart is the size of Volkswagen Beetle for crying out loud!

I don’t want to give away too much but the money shot is near the end of the film and there are plenty of surprises along the way as researchers explore the kingdom of this blue giant. Check it out tonight, 8pm eastern and pacific time and report back here after the show and let me know what you thought!

4 Replies to “Enter the Kingdom of the Blue Whale”