What better way to get at the question of recreational fishing impacts to ocean wildlife than to study historical pictures of the day’s catch on the docks at Key West, Florida? The American island paradise is legendary for fishing, frequented by Ernest Hemingway and other huntsmen since the early 1950’s.

Trends in the size and types of trophy fish landed from Key West 1957 to 2008 is the subject Loren McClenachan’s thesis research at Scripps Institute of Oceanography. The scientific results are published in Conservation Biology with the unsurprising title “loss of large trophy fish” (McClenachan, 2009). The photo below is from 1958, shall we say, back in the good old days? 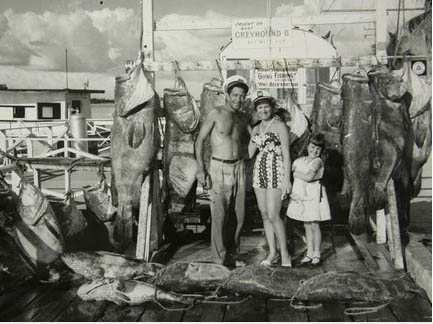 Fishing trophies in 1958, from Monroe County Library in Key West.

To see what fishermen were catching off Key West between then and now, stop and visit Mark Powell at Blogfish, or read the interview with McClenachan by Julia Griffin from the Miller-McCune Center, also with images.

The photo survey documented major changes in the last 50 years, including large declines in fish size, and a shift from large Groupers to small Snappers. Its a great case study. Let’s hope this message gets to where it needs to be, among the fishermen.

What can be done to turn this around? First, set maximum (not only minimum) size limits. Old fish produce the most eggs. Second, secure marine protected areas around essential fish habitat. MPAs work, but too many lack no-take zones. Third, engage broad stewardship. Practice catch and release, limit destructive fishing gear, etc. There must be more. What’s your solution?

2 Replies to “Trophy fish, back in the day”