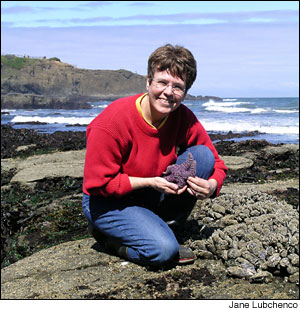 Jane Lubchenco, the marine scientist named by President Obama to head the National Oceanic and Atmospheric Administration, finally took her new job today, after she was confirmed in the Senate by unanimous consent last night.

Dr. Lubchenco is the first woman to head NOAA. She built an international reputation for her scientific work on marine conservation and climate change and for her ongoing ongoing efforts to help scientists participate in public policy debates and communicate their work to the general public.

Oceans advocates consider her someone who can help elevate important ocean issues in the public mind. She speaks with authority, and is known for her ability to explain complex scientific ideas to people outside of the research realm.