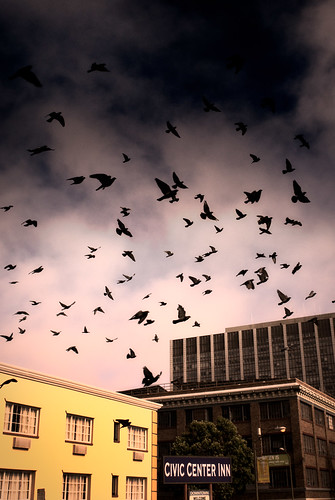 Some of the species in the genus Pseudo-nitzschia are nasty little diatoms.  They produce domoic acid, a neurotoxin typically to blame for all sorts of marine vertebrate deaths.  Alfred Hitcocks’s 1963 film “The Birds” dramatizes a bird attack incident blamed on domoic acid. Human consumption of shellfish that has filtered Pseudo-nitzschia leads to amnesic shellfish poisoning.  A great meal of Oysters Rockefeller can lead to short-term memory loss.  It appears, and we as humans are to blame, that algal blooms dominated by these wee-beasties is increasing in both frequency and duration.

A new study in Nature Geoscience finds that domoic acid can make it to the deep.  Sediment traps set at 500m and 800m below the ocean surface off southern California. “The sinking particles contain over five times the United States federal limit of domoic acid.” The peaks coincided lagged only by a few days behind peaks in surface concentration implying that transport of domoic acids was immediate.  Previous work found that for both organisms in the continental shelf and throughout the water column domoic acid is pervasive.  This study suggests that domic acid concentrations in deep-sea organisms could also be considerable.

Add this to another way anthropogenic disturbance is reaching into the deep.

One Reply to “Nerve Toxins In The Deep”