In 2007, an inspired group of sea turtle researchers launched an event called the Great Turtle Race, in which they tracked satellite tagged animals across the Pacific from Costa Rica to the Galapagos. The online event raised money and awareness for the plight of the sea turtle. All 7 species of sea turtle are endangered.

At DSN we like to promote the profound, so this year we are promoting the deep diving and long diving events as “Iron Turtle” categories to distinguish the great turtles from the … you know, hasty turtles who like to get there fast. DSN will bestow the Iron Turtle on the victor in the competition, based upon a simple scoring system we have not yet devised. Please visit the Great Turtle Race website to pick your favorite turtles. 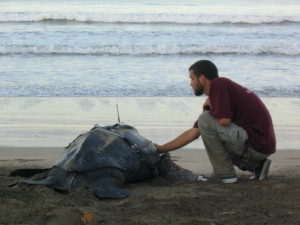 Here’s a brain teaser for all of you deep-sea nerds out there: What do Pearl Jam, R.E.M., Conservation International, National Geographic, the Canadian Sea Turtle Network, Olympic swimmers, surfers, school kids, and scientists all have in common?

Give up? (You should. You’re never going to guess. This isn’t a sudoku puzzle.)

Answer: an online media event following 11 adult leatherback sea turtles on their trans-Atlantic migration from feeding grounds in Canada to breeding grounds in the Caribbean – The Great Turtle Race! The first turtle to cross the finish line and enters the Wider Caribbean wins!

That’s right, DSN fans! It’s back. You might remember the 2007 Great Turtle Race, when 11 female leatherbacks ‘raced’ from their nesting beach in Costa Rica to the Galapagos Islands.

This year, GTR is being co-organized by Conservation International, National Geographic, and field partner Canadian Sea Turtle Network, and is bigger and better than ever. We’ve got males and we’ve got females. We’ve got the biggest turtle ever recorded in Canada. And we’ve got a few surprises…

Tomorrow’s launch (17 April at 11AM EST) on www.GreatTurtleRace.org, will feature the interactive Race map as well as rich leatherback and ocean-related content for people of all ages.

Along the way, the turtles will also be competing in a pentathalon of swimming challenges to see who enters the coldest water, who dives the deepest, who dives the longest, and who travels the greatest distance during the Race. Check back to DSN to keep track of these denizens of the deep during their deep-diving challenges – DSN is sponsoring the Iron Turtle Competition!

Turtle sponsors include rock bands Pearl Jam (turtle: Backspacer) and R.E.M. (turtle: Nightswimmer –get it? if not, figure it out…), multiple schools (have to keep the kids involved), and, of course, the Deep Search Foundation, whose president is that legendary explorer of the deep, Dr Sylvia Earle.

In a special twist this year, the turtles, while already being natural adept swimmers, are being ‘coached in the Race by U.S.A. Olympic swimming champions Janet Evans, Amanda Beard, Jason Lezak, Eric Shanteau, and Aaron Peirsol. And up in the broadcast booth, calling the Race from start to finish, will be NBC’s ‘Voice of Swimming,’ Rowdy Gaines, along with our favorite globetrotting spokesturtle, Mr. Leatherback.

This eclectic group of people from incredibly diverse backgrounds and experiences is coming together for a common cause – to celebrate and protect leatherback turtles and their ocean world.

Join them! Get into the Race right now!

CNN Article: Endangered species race to save their future