The winner in the Great Turtle Race 2009 Iron Turtle Competition is Cali, a leatherback turtle from Bullis Charter School in Palo Alto, California. The male leatherback turtle placed first and second in two deep diving events; with 148 dives longer than one hour, and five dives deeper than 800 m during the 14 day Great Turtle Race marathon event. Cali is hereby declared the victor in the Iron Turtle 2009 competition with 8 points out of a possible 15.

The only Race winner to place in the diving events was Seabiscuit, who finished third in the deep diving competition. Lindblad the Explorer took second place in the long diver competition with 108 dives longer than one hour. Cali was bested by Grembo Jones is the deep diving competition. Grembo completed six dives deeper than 800 m between Nova Scotia, Canada and the sea turtles’ final destination in the Caribbean Sea. 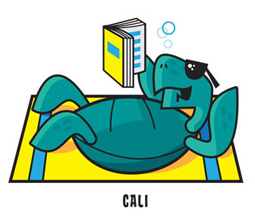 The Great Turtle Race scoring system was implemented by academic judges at Deep Sea News and Conservation International based on rules set forth by USA Swimming.

Watch a replay of the race here at National Geographic.