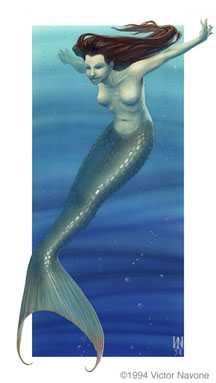 Scientists studying the fate of carbon particles originating in Southern Ocean plankton blooms find that the carbon never reaches the deep seafloor.  This delivers another blow to iron fertilization experiments hoping to sequester carbon in the deep-sea.

The first-ever robotic deep-ocean DNA laboratory was deployed at 640 m depth in Monterey Bay. The self-contained apparatus collects deep-sea water and scans for genetic material. The robot successfully identified genetic material from marine bacteria when the first water sample ran through the system on May 1.

Researchers using a deep-sea ROV to study microbial communities of Great Lakes sinkholes found purple bacteria in Lake Huron that can photosynthesize as easily in sulfur-rich water as they can in freshwater, and white microbial mats similar to those around deep-ocean heat vents. Scientists believe the microbes are primordial, from a Silurian sea 300 million years ago.

Mermaid from the VNOG Blog, a weblog for illustrator Victor Navone’s Online Gallery