Vent crabs live in the dark depths of the ocean. Previous studies have shown that the vent crab Bythograea thermydron has a reproductive cycle synchronized with Spring and Summer phytoplankton blooms 2.5 km above the East Pacific Rise. It was hypothesized that female crabs moved away from the toxic vents, once impregnated, to raise their young. In studies of other hydrothermal vent organisms it was found that reproductive patterns were phylogenetically constrained. McKitrick (1993) defines a phylogenetic constraint as:

“any result or component of the phylogenetic history of a lineage that prevents an anticipated course of evolution in that lineage.”

In other words, an organism is limited by the abilities, morphology, genes, etc. of its last common ancestor, which is limited by the ancestor of that one, and so on through the lineage. The descendants of that organism are likewise constrained by material present in it. Novel adaptations cannot arise spontaneously. By this theory, it should stand that vent crabs related to the more well-studied Bythograea thermydron should have similar developmental processes and reproductive patterns. 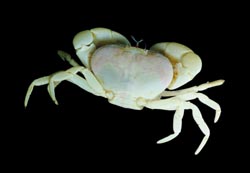 Bythograea thermydron from the East Pacific Rise. Photo from University of Delware Photos.

Ana Hilário and colleagues studied two Bythograea crab species, B. laubieri and B. vrijenhoeki, from the southern portion of the East Pacific Rise and the Pacific-Antarctic Ridge. The found that reproductive the developmental stages, gonadal morphology and microstructure are very similar to B. thermydron. When looking at measurements of the unfertilized egg cells across several females they discovered that the populations of the other two crabs were not synchronous in the development of the oocyte. Vitellogenisis is that development of the yolk as the egg matures. Hilário and colleagues individuals that were previtellogenic, vitellogenic or fully mature in their samples. This is in contrast with B. thermydron, where the population will develop eggs together as they await their phytoplankton bloom mana from above. These three species of crab are similar in morphology and size, therefore that cannot be a confounding factor in oocyte measurement.

This raises the question of whether seasonal reproduction is a phylogenetically constrained trait, as shown in other studies. It was long thought that the deep sea was cut off from the surface, or that the processes happening at the surface did not significantly impact the deep sea. As Jon Copley mentioned in yesterday’s fabulous guest post, food is scarce in the deep sea and hydrothermal vents are highly productive environments. But if female crabs need to move away from the influence of the vents to protect their offspring, they are missing out on the ventaliscious yummies! Major bummer huh? Maybe that is why B. thermydron in the north reproduces in synchrony with phytoplankton blooms a mile and half above it. When that phytoplankton falls down, it is raining food that can supplement gravid females. But I do not think it is known if females bulk up on vent meat before they mate and head to the outskirts of town.

B. thermydron is lucky in that it is situated under a productive gyre which concentrates the phytoplankton. The two more southern crab species are not so lucky. They are located under an oligotrophic gyre, meaning that the nutrients do not make it to the surface waters and cannot support large seasonal phytoplankton blooms. So it is unclear whether these bythograeids experience any seasonal cues whatsoever. This explains the lack of synchrony in their gametogenic development. It would be interesting to see if these crabs could be able to synchronize gametogensis in the presence of a seasonally stable food supply versus an unlimited food supply through a laboratory experiment. Additonally, whether synchrony breaks down in B. thermydron in the face of an unlimited food supply. It seems to me that paper is evidence against phylogenetically constrained traits that are ecological in nature.
—————————————————————————————————

One Reply to “Do Vent Crabs Do It Under the Gyre?”