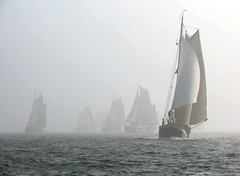 [First] sheets aren’t sails, as landlubbers might expect, but ropes (or occasionally, chains). These are fixed to the lower corners of sails, to hold them in place. If three sheets are loose and blowing about in the wind then the sails will flap and the boat will lurch about like a drunken sailor.

The phrase is these days more often given as ‘three sheets to the wind’, rather than the original ‘three sheets in the wind’. The earliest printed citation that I can find is in Pierce Egan’s Real Life in London, 1821:

“Old Wax and Bristles is about three sheets in the wind.”

Sailors at that time had a sliding scale of drunkenness; three sheets was the falling over stage; tipsy was just ‘one sheet in the wind’, or ‘a sheet in the wind’s eye’. An example appears in the novel The Fisher’s Daughter, by Catherine Ward, 1824:

“Wolf replenished his glass at the request of Mr. Blust, who, instead of being one sheet in the wind, was likely to get to three before he took his departure.”

Robert Louis Stevenson was as instrumental in inventing the imagery of ‘yo ho ho and a bottle of rum’ piracy as his countryman and contemporary Sir Walter Scott was in inventing the tartan and shortbread ‘Bonnie Scotland’. Stevenson used the ‘tipsy’ version of the phrase in Treasure Island, 1883 – the book that gave us ‘X marks the spot’, ‘shiver me timbers’ and the archetypal one-legged, parrot-carrying pirate, Long John Silver. He gave Silver the line:

“Maybe you think we were all a sheet in the wind’s eye. But I’ll tell you I was sober; “

2 Replies to “Nautical Term/Phrase Wednesday: Three Sheets to the Wind”