Wallace J. Nichols is a sea turtle biologist and marine conservation activist affiliated with the California Academy of Sciences, Ocean Revolution, and the Sea Turtle Network, among others. J’s blog is dedicated to new beginnings and fresh ideas, especially among young people. 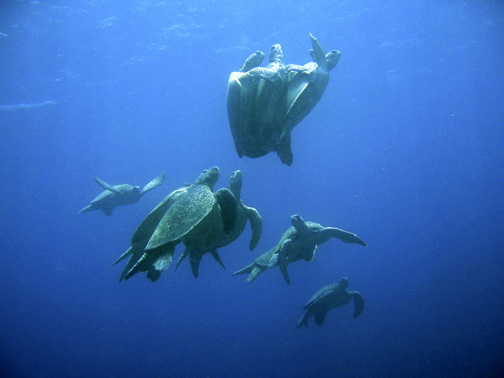 There should be a sign posted along beaches of the world during a certain season: “WARNING: Enter water at your own risk”.  I’m not speaking of extreme undertow or heavy shore-break.  Not water quality, or red tide concerns. Nor warnings against poisonous jellyfish.  These are all important water safety concerns, but I am referring to something else, something almost as dangerous. I am talking about the distinctly unique experience of being in the water with green turtles during mating season.

On a recent research expedition to Indonesia, we had the opportunity to sneak up on a pair of mating green turtles. It’s a sight to behold for its grace, beauty, ancient simplicity and…well, its ruggedness.

A bit of an aquatic turtle dance precedes copulation.  Males nip and bump and eventually mount the female.  To a biologist, it’s kind of like watching two boulders with flippers getting it on.  Other than the female guiding the rigid ball of turtle to the surface to breath, there’s not much apparent movement during the act. Throughout the mating season males maintain high activity levels, presumably associated with locating and mating with as many females as possible to maximise their reproductive output (Hays et al., 2001).

The male turtle hangs on to the front edge of the female’s shell with a pair of large recurved claws.  The male’s tail has another “claw” at the end.  This facilitates a sturdy three-point attachment, whereby the penis can enter the cloaca of the female.  Attempts to knock male #1 off of the female turtle by males #2 through 17 are frequent, severe and generally unsuccessful.  Physical damage to both members of the copulating pair is common.

Through the years, this has been impressively noted by the males of the human species.  I’m willing to bet this is somehow related to the belief that turtle eggs are aphrodisiacs beyond compare.  Incidentally, and perhaps not unexpectedly, the dried and shaved green turtle penis is considered wickedly potent when added to booze, a sort of Viagra with King Kong strength.  First hand experience tells me that neither are particularly effective.

Back in the ocean, males are the pursuers, the females are the deciders.  An unreceptive female will press rear flippers together and/or rest on the sea floor, prohibiting access to her cloaca and eggs.  That leaves the males swimming in circles around her, biting each other, mounting each other, mounting logs or buoys or…(back to the warning signs on the beach)…you.