The New York Times reports that religious leaders are helping to form an anti-pirate movement, now underway in Somalia, and the Toyota Surf joins the Auto Hall of Infamy.

Grass-roots, antipirate militias are forming. Sheiks and government leaders are embarking on a campaign to excommunicate the pirates, telling them to get out of town and preaching at mosques for women not to marry these un-Islamic, thieving “burcad badeed,” which in Somali translates as sea bandit.

Interestingly, a pirates council called “the Corporation” is responding to the pressure.

Puntland pirates, driving Toyota Surfs, … the pirate ride of choice, arrived at an elder’s house in Garoowe to make their case.

“Negotiation is our religion,” said one pirate, Abdirizak Elmi Abdullahi. 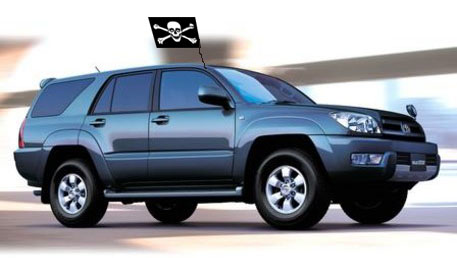